"CONSTANTINOPOLIS": Uke-Song About the Seer of Byzantion


ORIGINAL SONG: "Moscow Nights"(Подмосковные вечера,  Podmoskovnie vechera), Chad Mitchell Trio, 1963. You can listen to the Trio's well-known  version on YouTube here, or a version with English translation here.
The original was created as "Leningrad Nights" by composer Solovyov-Sedoi and poet Matusovsky in 1955, but changed at the request of the Ministry of Culture for use in a documentary about a national athletic competition. The tune was subsequently popularized in the West, in the middle of the Cold War era, by Van Cliburn in 1958, and recorded with commercial success by Kenny Ball and the Jazzmen, and the Chad Mitchell Trio in the early 60s.
PARODY COMPOSED: Giorgio Coniglio, August 2018.  To view the lyrics without the chord-charts, proceed to our blog "Edifying Nonsense" HERE. You will also find further discussion of the history of Constantinople and other matters.

SONGLINKS: This post deals with Graeco-Roman history during the Byzantine period. Another song dealing with Greek history, culture and travels is found in an earlier blogpost as  "Singable Limerick Medley #15: Travels in Greece". This entire effort was inspired by "Istanbul (Not Constantinople)", a swing-era hit with a very catchy tune whose lyrics are a bit truncated re history.
CONSTANTINOPOLIS

(to the tune of "Moscow Nights") 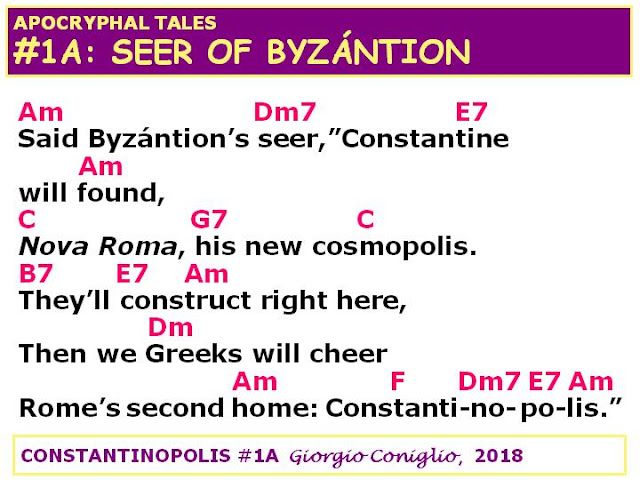 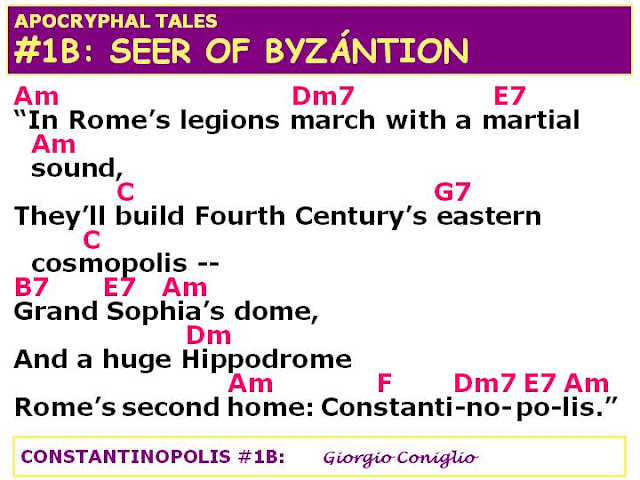 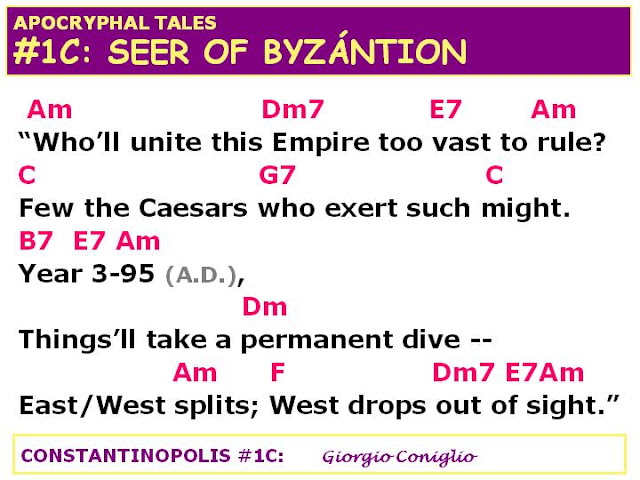 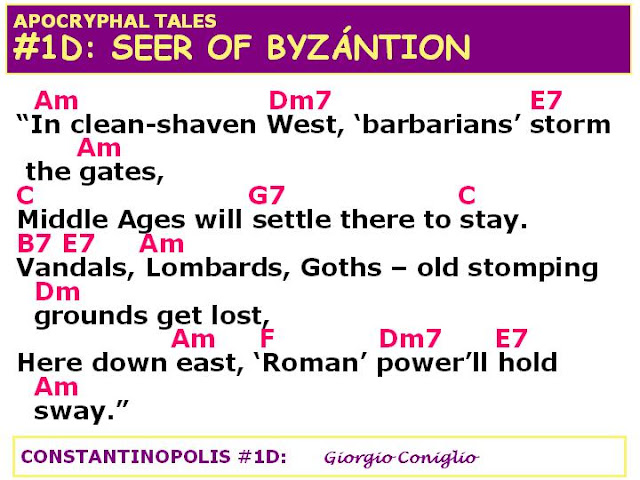 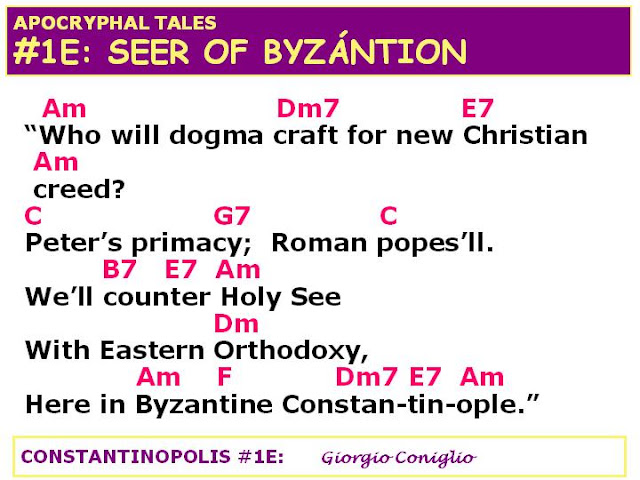 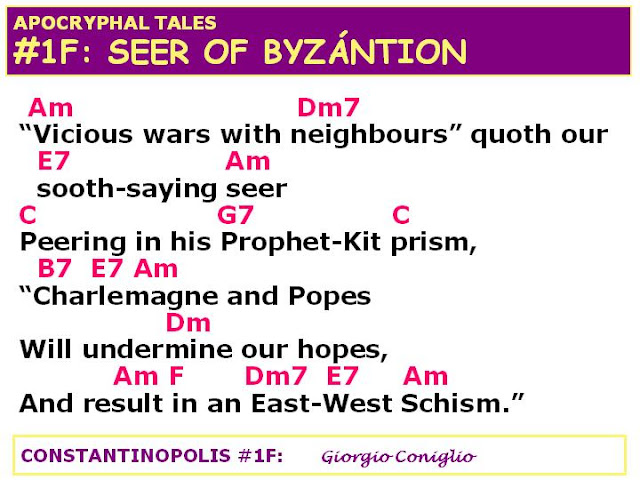 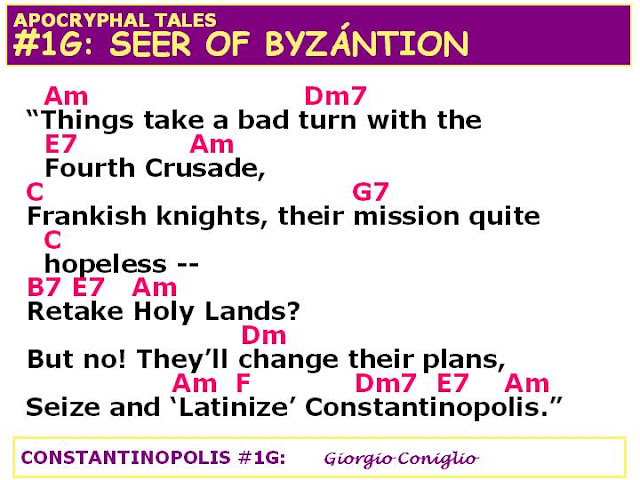 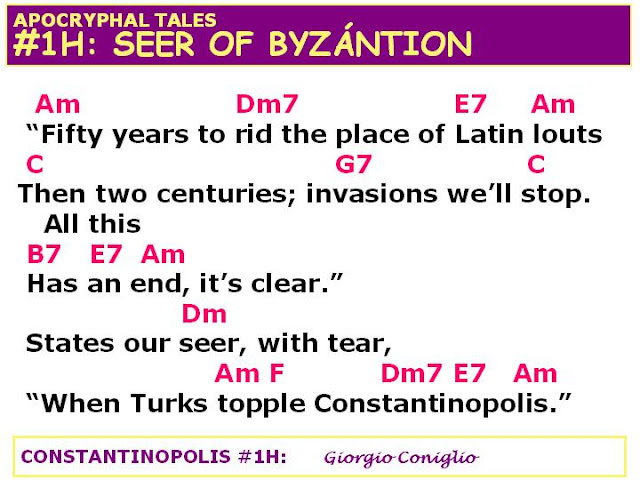 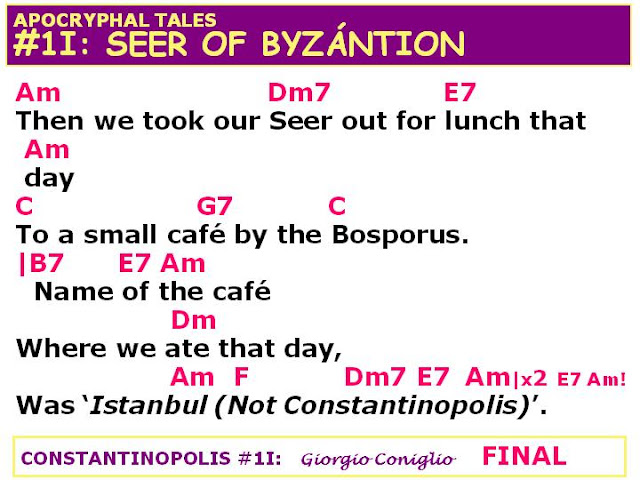 
*  the prediction was made by the Seer early in the fourth century A.D.
Byzántion (Greek), later known as Byzantium (Latin) was at that time a moderate-sized Greek colony-city on the Bosporus. It was chosen by the Roman Emperor Constantine to become the eastern capital of his empire.
As capital of the Roman Empire (also called Romania), the grand city was known as Constantinopolis, or Konstantinoupolis, for most of its history, i.e. until 1453 A.D. (later as Istanbul by the Turks). The term 'Byzantine Empire' has only been in use by Western historians since that time.
ORIGINAL SONG-LYRICS
(click on any song-chart to enlarge and proceed to thumbnail mode) 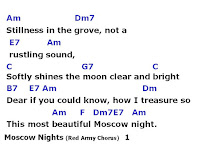 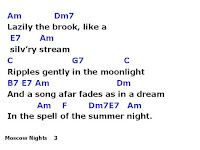 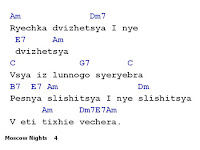 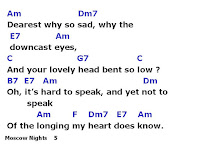 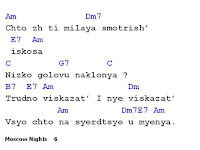 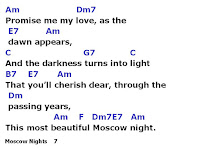 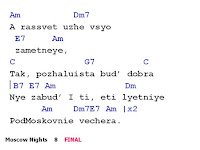 Posted by Giorgio Coniglio at 04:43