An Apocryphal Tale of Dance and Romance: THE FUNNIVERSARY SONG

ORIGINAL SONG: Any old limerick verses can be sung to "The Limerick Song", as per YouTube here. However we have undertaken the onerous task  of bringing you other melodies for singing limericks, as per the post "Novel Melodies for Singing Limericks".
So, for this baby, we will exploit the melody of the verses for "The Anniversary Song". Al Jolson and Saul Chaplin originally had adapted the music (the score had been published in the U.S. in 1896) and wrote lyrics in 1946 to the 1880 composition "Waves of the Danube" by prolific Romanian composer Ion Ivanovici; his music had won a prize at the 1889 World Exhibition in Paris. The Jolson adaptation has been recorded by Dina Shore, Rosemary Clooney, Guy Lombardo, the Glenn Miller Orchestra, Franks Sinatra, Pat Boone, Bing Crosby etc.
LIMERICK VERSE:  Original verses composed by Giorgio Coniglio, 2017-2018. Two of the verses have been published at the OEDILF website (the Omnificent English Dictionary in Limerick Form); the entry number for the OEDILF version is noted at the bottom of the chord-chart slides.
Readers should note that (i) each verse of the original song can accpomodate two limerick verses, (ii) the bridge has been adapted from the original Ivanovici-Jolson tune, and is NOT a limerick.
PARODY COMPOSED: Giorgio Coniglio, August 2018.

(to a tune inspired by the verses of of Al Jolson's "The Anniversary Song", a.k.a. "Waves of the Danube")

In that room, bride and groom entered marriage
(Forty guests, kith and kin, came 'by carriage');
Formal garb and corsage
Adorned former garage.
It's our 'ballroom' (some Brits call it 'garage' GA-ridj).

We embarked on our marital dance
With a June honeymoon there in France
Later, raising our kids
Put romance on the skids,
Now they're grown, on their own: second chance.

Just a mile from home #1, with the 'ballroom',
Snowbirds nest in their lounge-lunch-and-loll room.
This garage: not enclosed,
But well low-sun exposed —
Our 'solarium' winter-and-fall room.

Winter's mild, so you don't need to huddle
(Every once-in-a-while we still cuddle).
Life's rewards we now glean --
The retirement scene:
Wonder what's it all mean? That's a muddle.

BRIDGE: I'll sit in my rocker, and you'll sit in yours.
(Your reading's disturbed by my rather loud snores).
Then, while dinner's heating, our glass of merlot;
I'll web-surf and you will sew.


NOTES:
North American: guh-RAWZH
British: GA-ridj
Well over three decades ago, the author was married in an at-home ceremony. A two-car attached garage in his bride's home, which had been enclosed by the previous owner served as the basis of the ballroom/garage gag and as a credible chapel/party-room. As it happened, all the guests used the first indicated (a la française) pronunciation. On our return to the same sun-belt neighbourhood three decades later, we found a home with a different type of garage upgrade.

UKULELE-FRIENDLY FORMAT (and guitar, too!)
(Click on any chord-chart slide to move to 'song-presentation mode'; then navigate through thumbnails at the bottom of the page.) 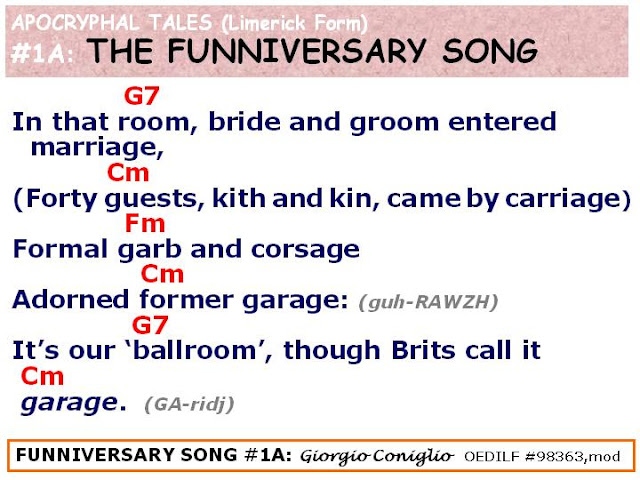 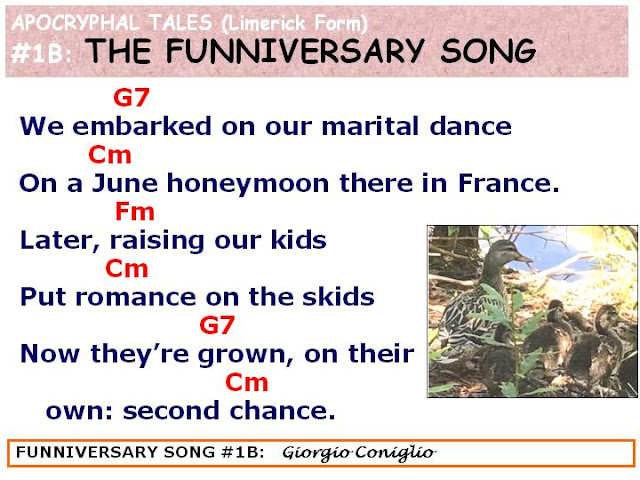 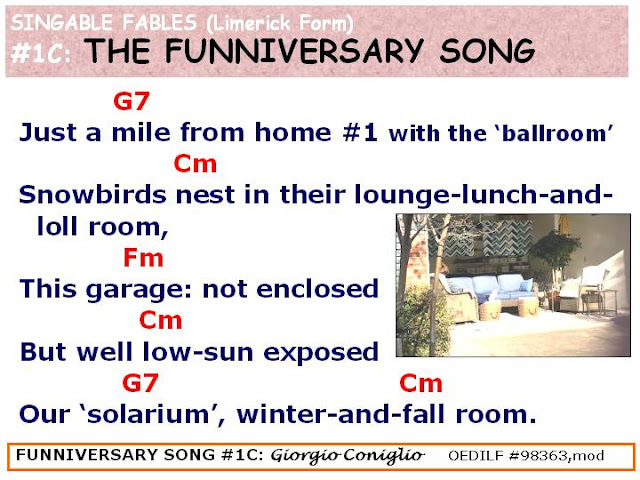 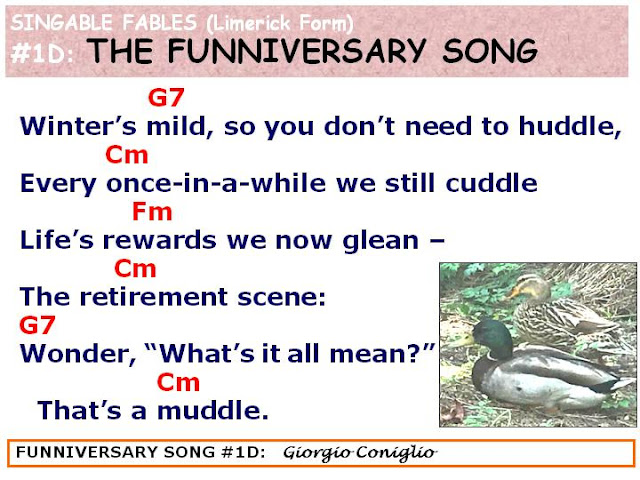 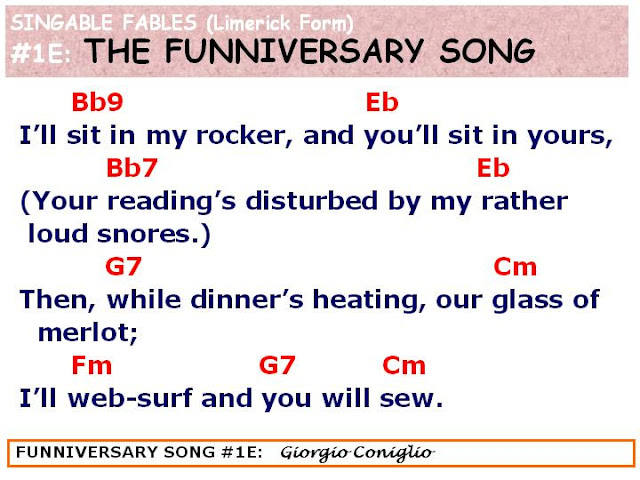 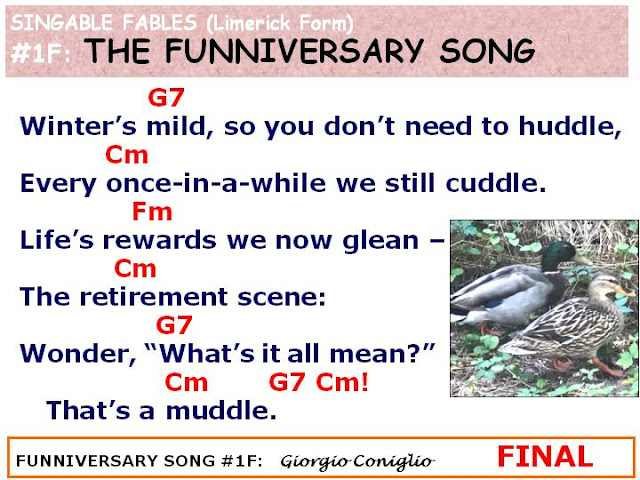 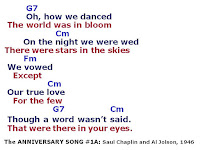 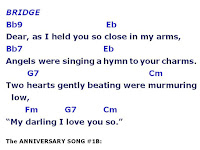 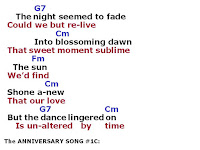 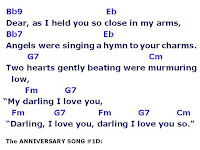 Posted by Giorgio Coniglio at 12:27