ORIGINAL SONG: These verses could be sung to  "The Limerick Song", as with other limerick-medleys that we have posted. However, for this medley, the verses have been set to a Romanian waltz theme. This tune seems appropriate for the sombre sentiment of some of the verses, and more importantly, we only learned how to do it recently. The tune is similar to "The Anniversary Song"; a Youtube recording by Al Jolson is found here.
LIMERICK VERSE:  Original verses composed by Giorgio Coniglio, and compiled in December 2017. Many of the poems have been published at the OEDILF website (the Omnificent English Dictionary in Limerick Form) by Giorgio Coniglio, 2016-2017. The OEDILF identifying number (#) and the Author's Note accompanying each poem, where relevant, are shown following the first verse.

SEASONAL MESSAGE:
Happy holidays to everyone out there in blogland.

You can enjoy some of Giorgio's parody songs for the holidays

(To the tune of "The Anniversary Song". Display of the lyrics has been condensed to 4 lines for each verse, with internal rhyming in line 3, rather than the more customary 5-line limerick format.)

1.(Classic, clean limerick)
There was an old man from Nantucket
Who kept all his cash in a bucket;
But his daughter named Nan ran away with a man
And as for the bucket, Nan took it.

2. “To the social milieu we bring flatus,
For which fault peevish offspring berate us.
We should state from the start, hate that insult, ‘Old Fart’;
We’ll depart. Won’t return.”  signed, The Late Us.

3. An old codger who lived on Cape Cod
Tended assets in fashion quite odd.
He would spend as he'd wish (often smelling of fish)
From his cache in his bucket of scrod.

4. An octogenarian bird
Thought that giving up sex was absurd.
So she programmed an app that she kept on her lap-
Top: "Remind me next March twenty-third."

5. An old duffer, with mien geriatric
Laced his skates  in a gesture theatric.

Dropped his cane, took the ice, loosened up in a trice,
And went on to complete a mean hat trick.

6. Centenarian Rose had a stroke
Playing bridge in the lounge with some folk.

And the last thing she did was to call out her bid;
Next card night she’ll be back; that’s no joke.

He could bring home the bacon with his legends of Macon.
He's just passed, we're deploring his loss.

8. "Mrs. Hart, things have gone quite amiss;
You've a block in your bundle of His.

My advice must be heeded — The right pacemaker's needed;
Then you'll live to one hundred in bliss."

9.“To the social milieu we brought flatus,
For which fault peevish heirs did berate us.
We had thought from the start that our title, ‘Old Fart’
We’d update.”,  Dear Departed (sic) / Late Us. 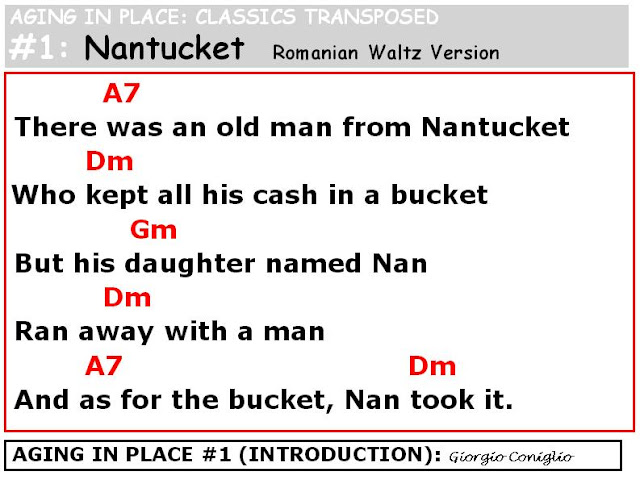 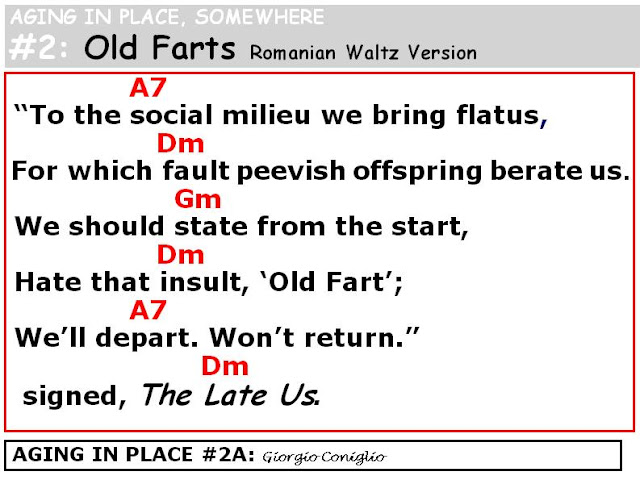 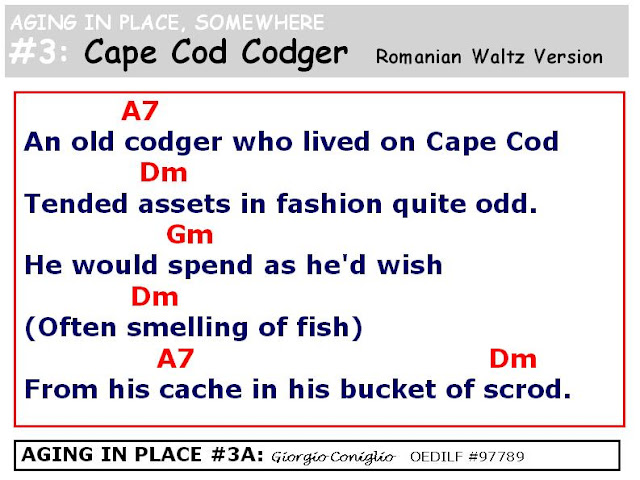 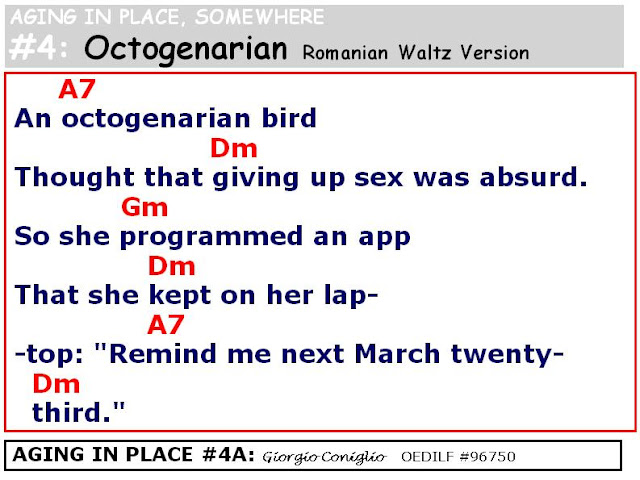 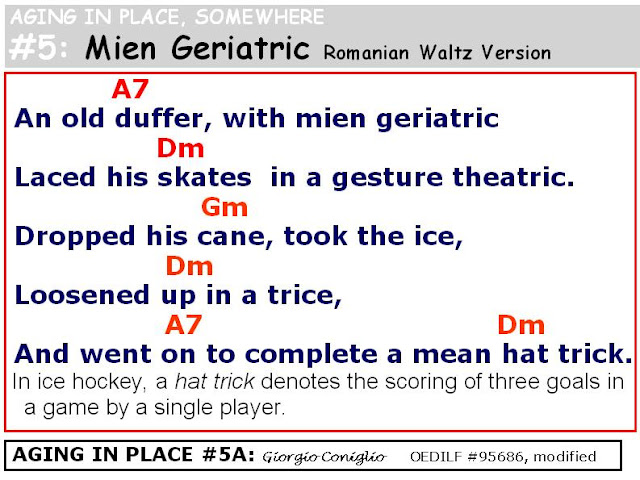 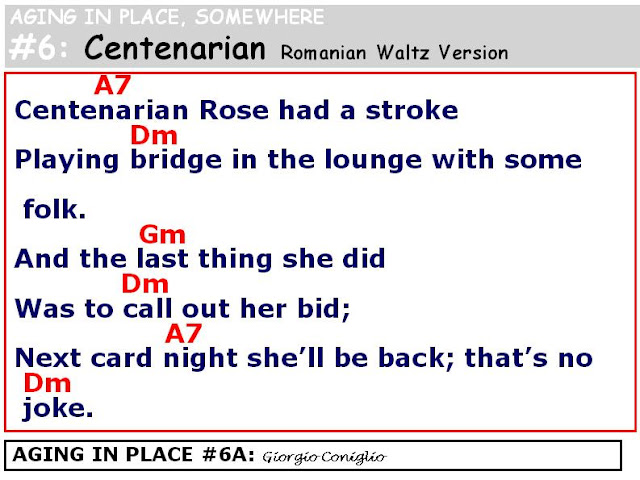 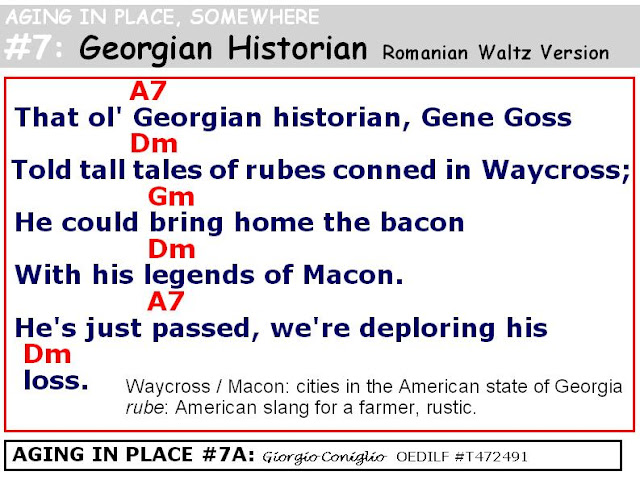 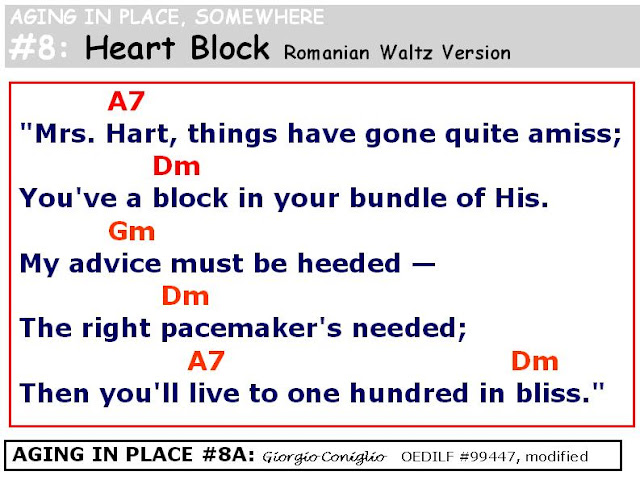 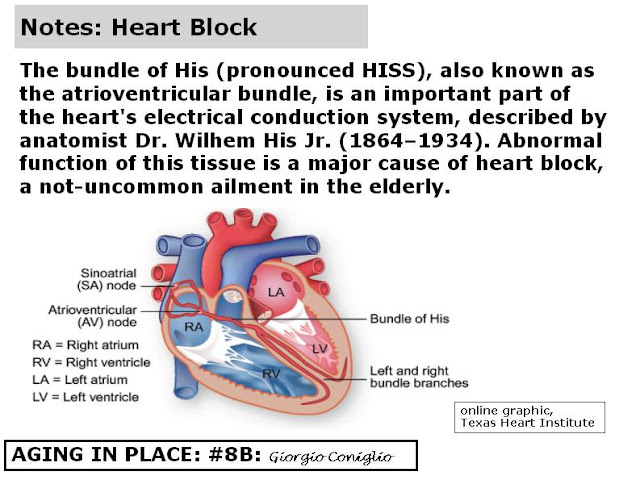 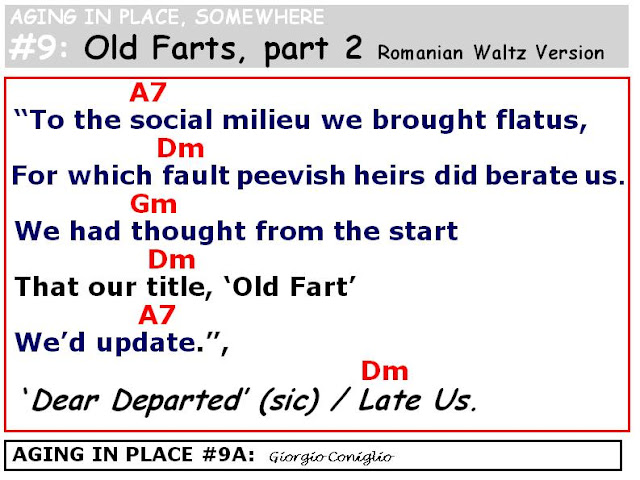 Posted by Giorgio Coniglio at 22:28