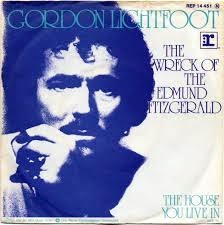 See an earlier collaboration of G. Lightfoot and W. Shakespeare in a post of Nov 22 on this blog.

RE-WRITE OF THE HAMLET SOLILOQUY

(to the tune of "The Wreck of the Edmund Fitzgerald")

The question is …… Whether ‘tis nobler to suffer,
Fate’s arrows and stings so outrageous
Or to be, and take arms against troubling seas,
And oppose them with action courageous?


To die, not to be; it's just sleep, possibly
- An escape from heart-aches flesh is heir to -
All quiet past that portal, where no longer mortal
- consummation we offer a prayer to.


To die, to sleep, perchance to dream; there’s the rub;
For death’s dreams may provoke dissolution;
And the puzzling dread of that something when you’re dead
Discolours our strong resolution.


With dagger that’s naked we’d easily make it
To that land whence no traveller’s recovered.
But that puzzles our wills, rather bear our known ills
Than fly off to others undiscovered.


Explaining persistence of troubled existence,
For Time’s whips and scorns, who would bear’em?
The haughty, oppressors, and rejecting lovers -
The wrongs and the spurns they don’t spare’em.


And who would bear "fardels" - whatever those are -
With a life grimy, sweaty and weary,
Hauling tons of iron ore to the desolate shore
Of that low-lying lake some deem eerie?

Yet there’s puzzling dread of that thing when you’re dead
And the pale cast of thought which can sicken,
Enterprise of great moment and pith turns awry
And thus conscience makes all of us chicken.

The question lives on …… When the chips are all down,
To bear outrageous fate so much drearier?
Or to be, and take arms against troubling seas,
|And oppose them with action superior?|X2