Thanks to Tom Lehrer#2: THE UNIQUENESS OF 'NUCLEAR'

You can view these lyrics and commentary (without images or chords)  displayed on a parody-lyrics website at AmIRight.com Post "Of Residents and Presidents"


THE UNIQUENESS of 'NUCLEAR'

There was a swarm of parodists who pounced straight for the jugular;
They satirized a Pres whose speech was smug yet sometimes struggular;
Disdain for George the Son, less blame for James from Plains in evidence;
They pegged the mis-spoke ‘Nucular’ the catchword of the Presidents.

I toiled for several decades in the Section known as ‘Nuclear’;
Though now fairly famili-ar, I still find it peculi-ar
That highly educated voices, palatal and uvular
Would schedule tests, requests infested with the mis-spoke ‘NUCULAR’.

There's popular and insular and regular, oracular
Cuticular, vehicular, vesicular, vernacular
And tabular and tubular and muscular and modular
And cellular and singular and circular and nodular. 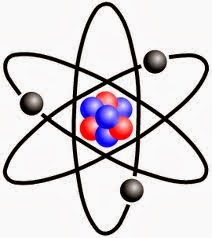 Triangular, corpuscular, spectacular and annular,
Articular and angular, glomerular and granular,
And glandular and scapular and spicular and globular
Molecular, trabecular, lenticular and lobular.

And endless adjectival terms in Med'cine and Biology
With current usage driven by their Latin deriv-ology,
Like saccular and secular and ovular, fascicular
Reticular, radicular, furuncular, funicular.


So, clearly there's no stimulus for apparatus cochlear,
That simulates the sound unique of proper-spoken ‘Nuclear’. 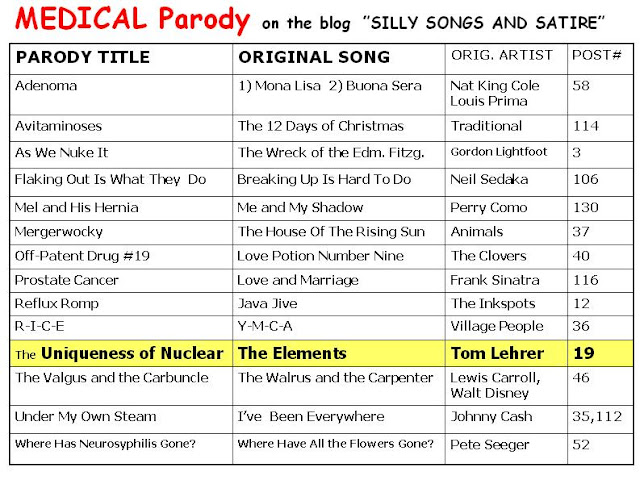 HOTLINKS TO OTHER MEDICAL-THEMED SONG-POSTINGS
Adenoma
Avitaminoses
As We Nuke It
Flaking Out is What They Do
Mel and His Hernia
Mergerwocky
Off-Patent Drug#19
Prostate Cancer
Reflux Romp
R-I-C-E
The Uniqueness of Nuclear (see below)
The Valgus and the Carbuncle
Under My Own Steam part#1
Under My Own Steam part#2
Where Has Neurosyphylis Gone?
...AND A FEW LIMERICK-BASED SONGS
Singable Limerick-Medley #17: Nuclear Cardiology
Singable Limerick-Medley #20: Medical Imaging

You can play/sing Tom Lehrer's original patter-song, "The Elements",  by checking  out Corktunes, the songbook of the Corktown Ukulele Jam here.  The chord-charts have the alternate-line superscript format that many ukesters seem to love.
Lehrer had adapted the melody from "The Major General's Song" from Gilbert and Sullivan's "Pirates of Penzance". There are 3 somewhat different melodies/chord-sequences used in alteration through the GandS song, and in Lehrer's derived take-off.

My suggestion for the first 3 verses of the patter-list portion of this parody are shown here, but adapt them as you like! Incidentally, the Eb7 chord may look formidable to some - just use the barred version of D7 one fret higher, than slide back for the D7 that follows! 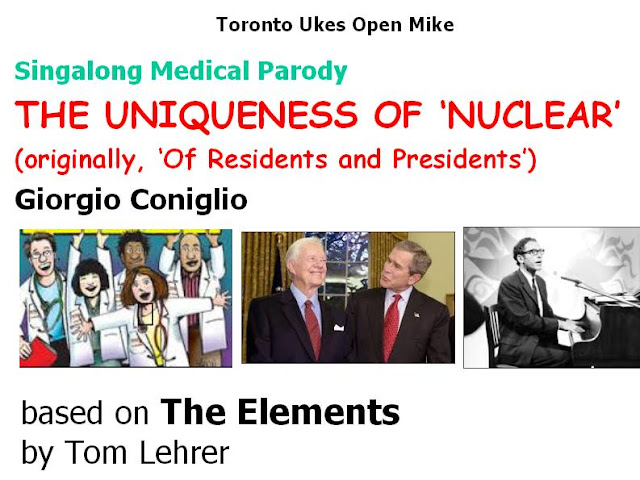 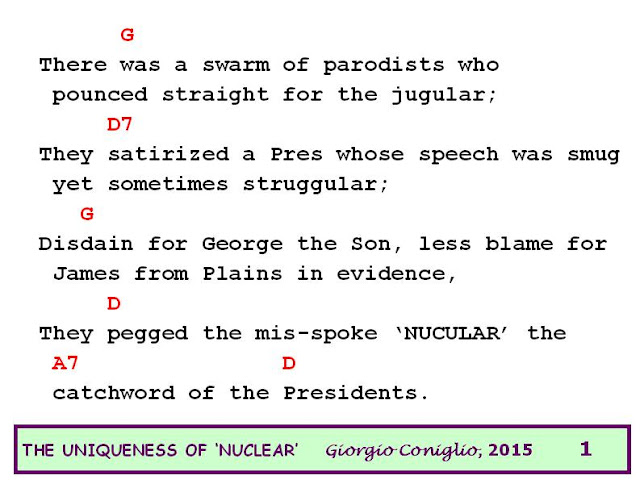 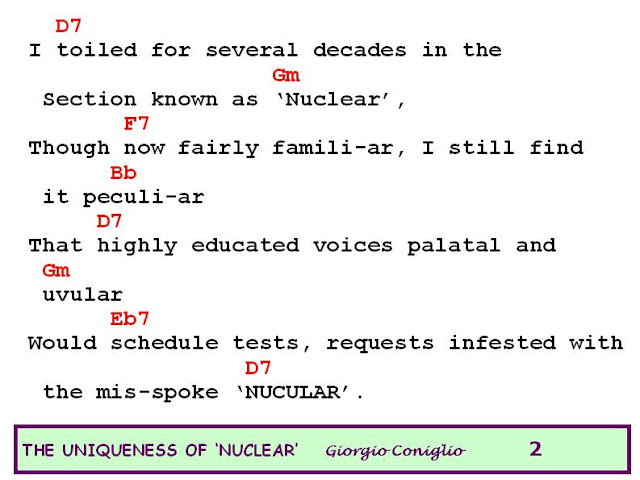 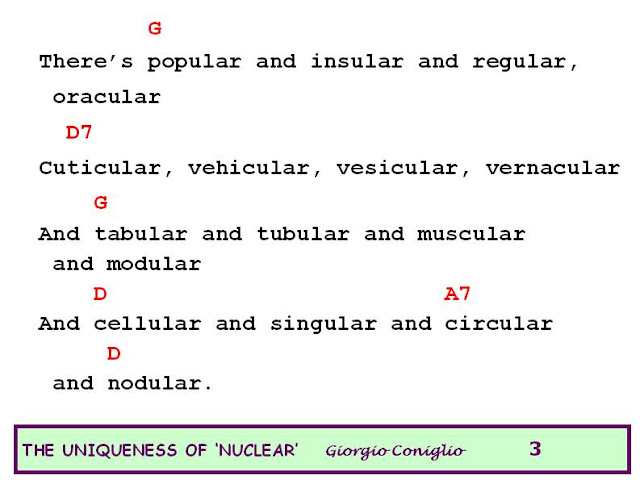 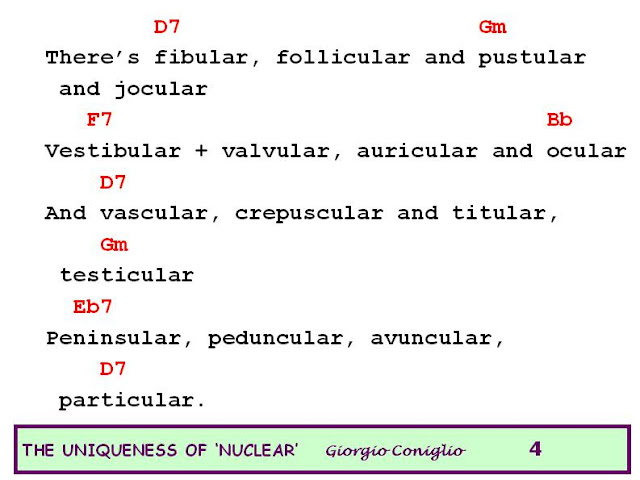 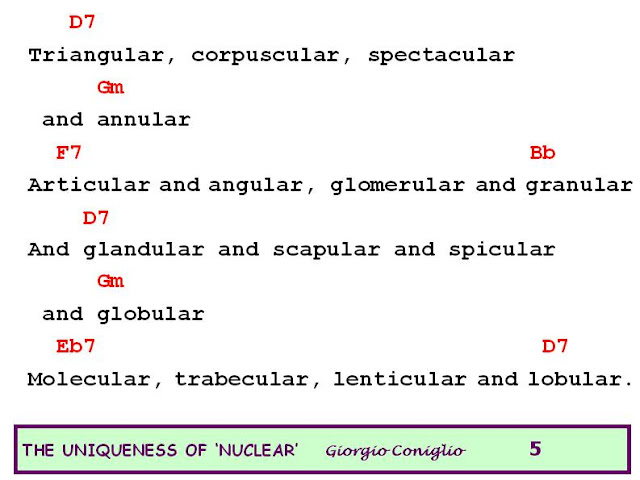 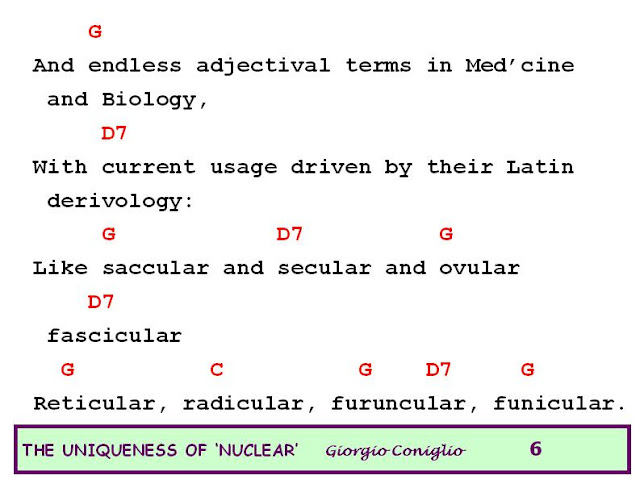 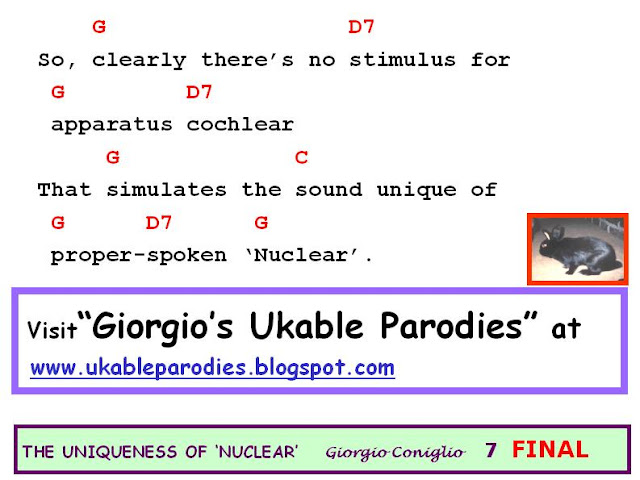 Posted by Giorgio Coniglio at 05:38