A Rollicking Irish Ballad About the Key Role of South Carolina: "ELECTION-RACE ANAGRAMS"

CREATIVE CARTOGRAPHY and PARODY LYRICS
WORDPLAY LINK: Creative cartography derived from anagrams is highlighted and explained on our companion blog, "Edifying Nonsense". See Wordplay post #16 for an explanation of the derivation of the anagrams, and the development of the "anagram sister-city initiative". 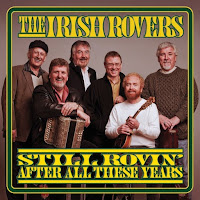 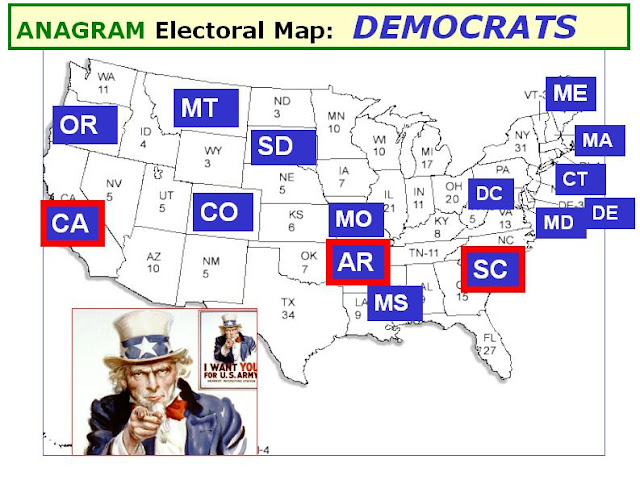 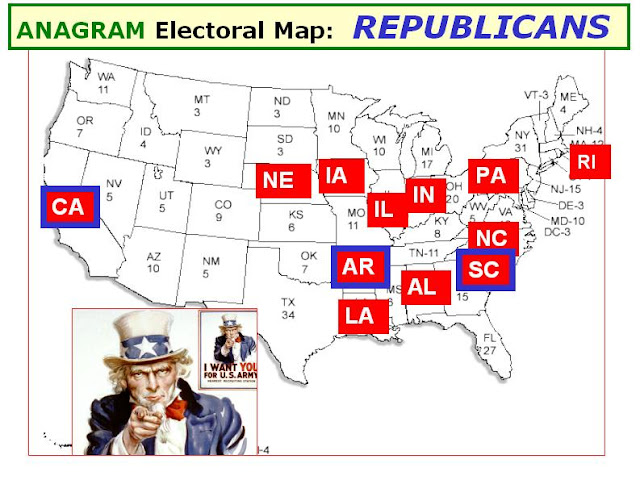 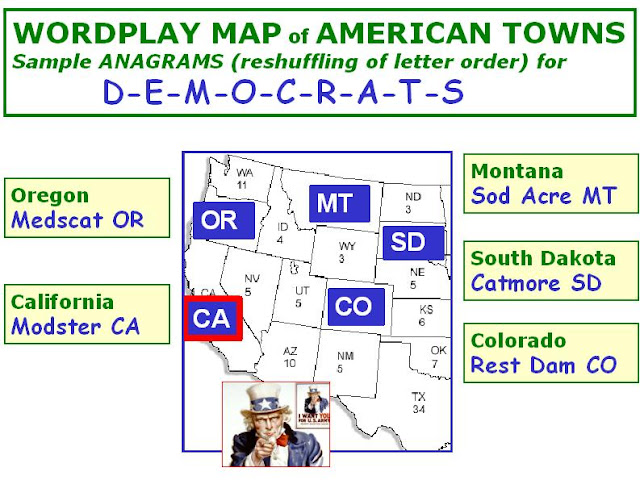 (to the tune of "Black Velvet Band") 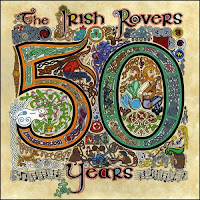 In that neat southern town they call CHARLESTON
(Which unscrambles to Northlea SC)
A WAR ravages South Caroli-ina -
It's that raw anagram rivalry.

With just eight electoral ballots
She's hardly the queen of the land
But what makes a great STATE (try teats, testa- )
Is a taste for some great anagrams.

Her 'I's help polish REPUBLICANS
While DEMOCRATS host 'O' and 'T';
What distinguishes South Caroli-ina -
All the partisans have 'S' and 'C'.

If electoral maps you do ponder
'Cause November is not very far
The battle's 3 critical RA-(A)CES
Are CA and SC and AR.

Well, the Blues have locked up the Seaboard
From MainE's Sodcart to Coaster MD
Very few Republican voters
Until Usable Rip in NC.

The Central view is quite different -
There Democrats won't do too well.
Reds carry the day in Bunslicer PA,
Puce's Barn and Spun Brace in IL.

Out West, Democrats are sure winners
(A fact that's astounding to know)
With Arse Doc in MT and Catmore SD
And Rest Dam and St Madre CO.

The South presents a mixed picture -
Blues unrivaled in Redcoat MS
While in LA and AL-aba-ama
Reds are victors -  there's no need to guess.

The swing states include CAlifornia
Whose anagrams tilt to'ard the Red
So in Burplines and Burnspiel there's Nil Superb
What was once a Close rAce is now dead.

Her 'I's help polish REPUBLICANS
While DEMOCRATS toast 'O' and 'T';
What distinguishes South Caroli-ina ?
All partisans have 'S' and 'C'.

Now come all ye Palinrube voters
Take Bluer Pain warning by me
Whenever you're out at the Lineup Bar
Look for Alpine Rub in SC.
There's Unripe Lab, Urban Pile, Prunebail
And Burial Pen - can't you see
With each Nubile Rap, ev'ry Alien Burp
There are great anagrams in SC. 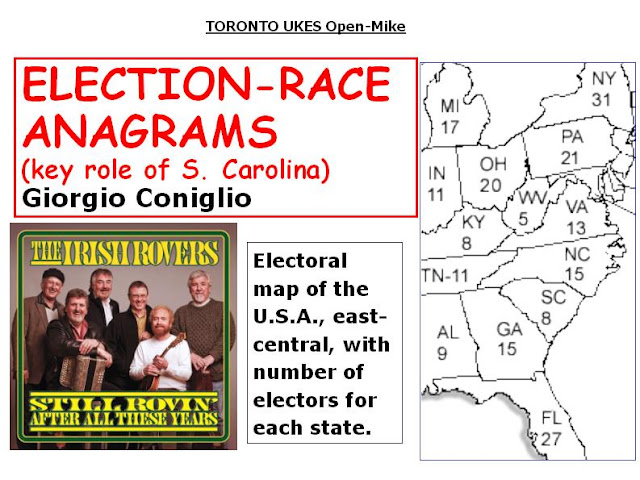 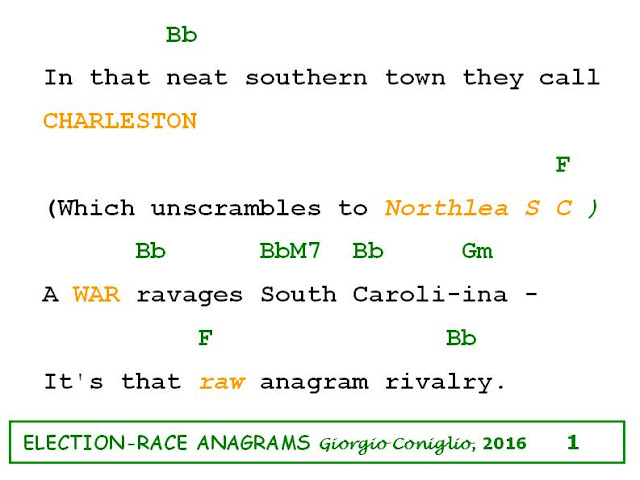 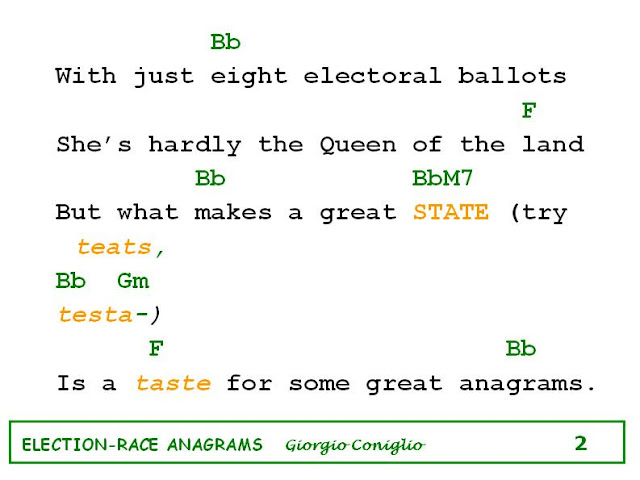 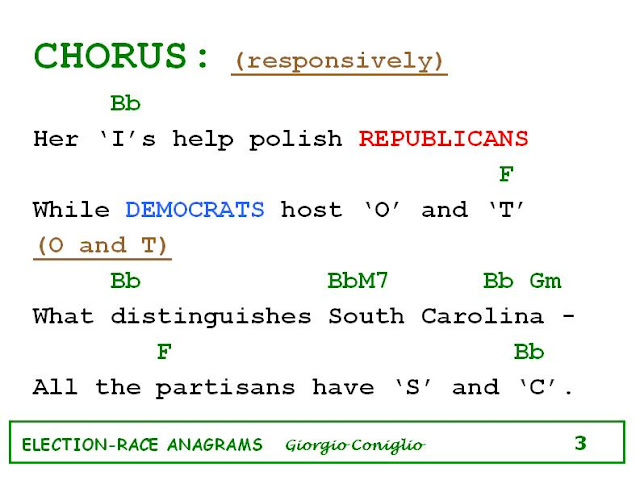 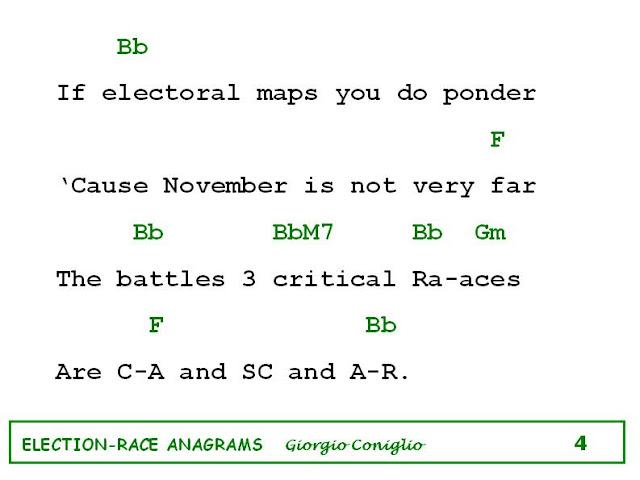 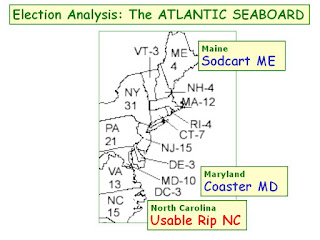 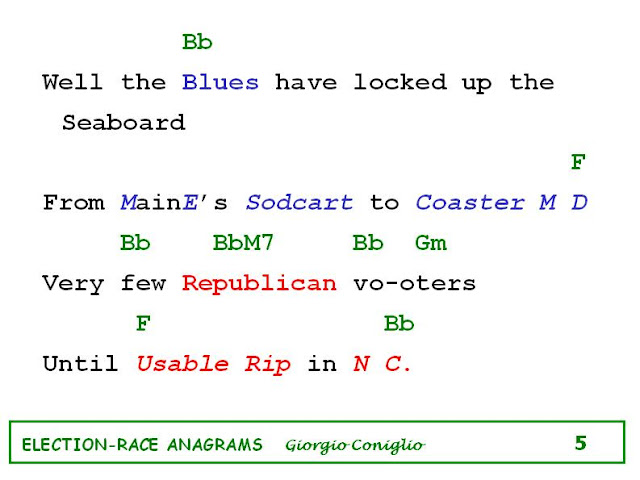 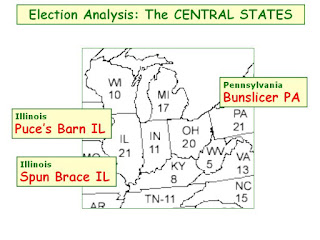 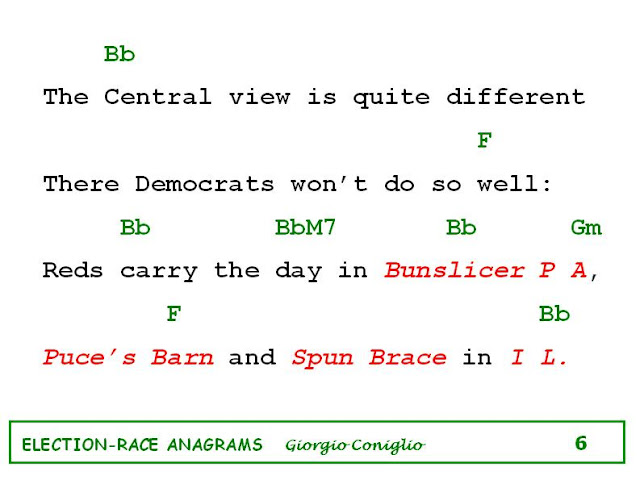 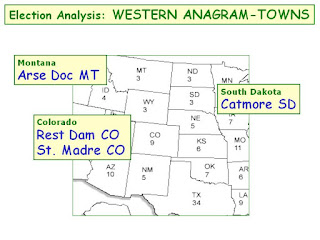 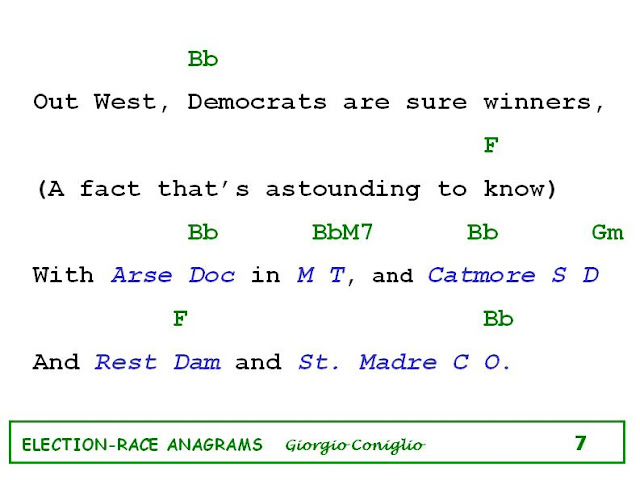 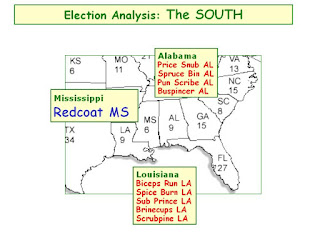 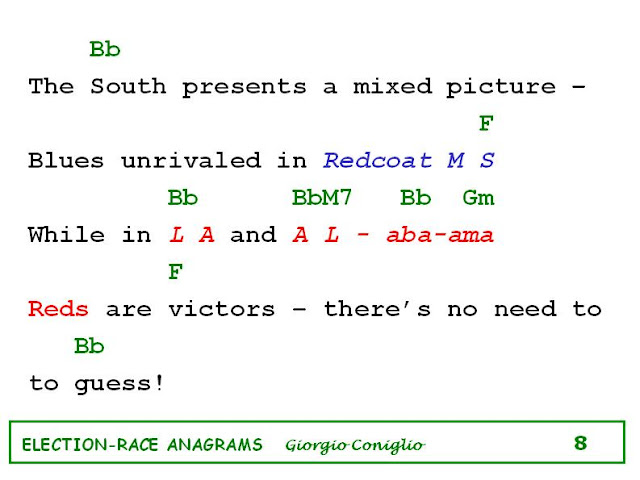 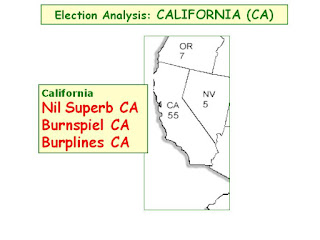 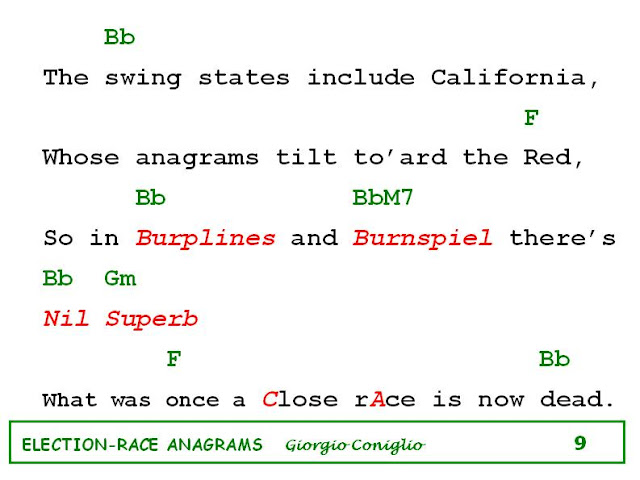 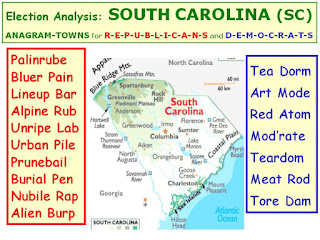 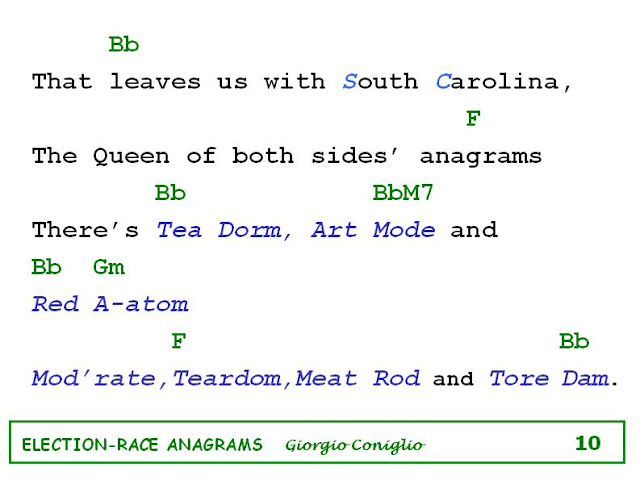 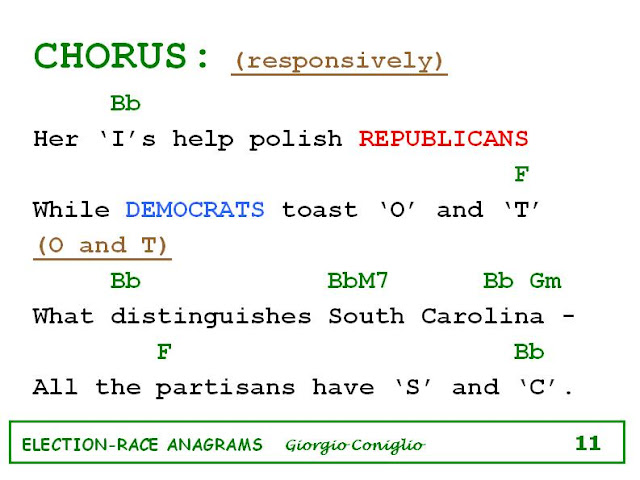 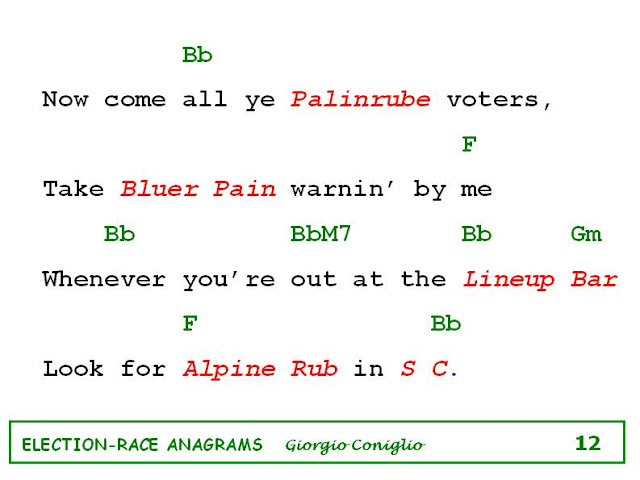 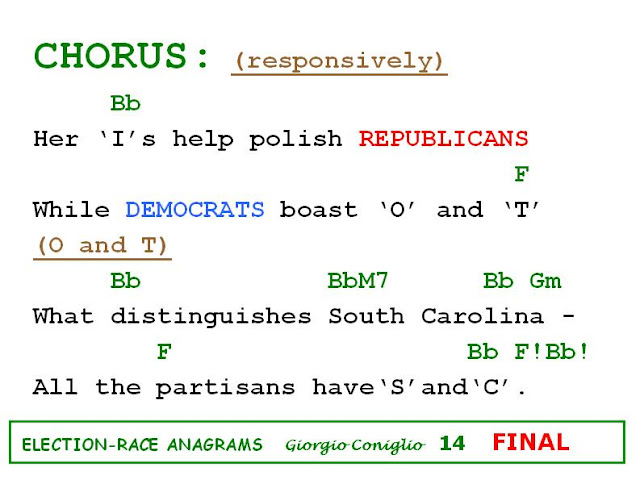 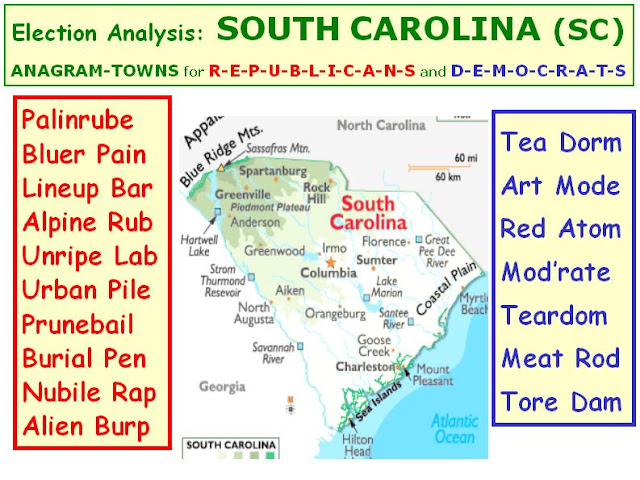 Posted by Giorgio Coniglio at 21:04