The War of 1812 Revived: THE PRATTLE OF NEW ORLEANS


You can view these lyrics and commentary displayed on a parody-lyrics website at AmIRight.com Post "The Prattle of New Orleans" 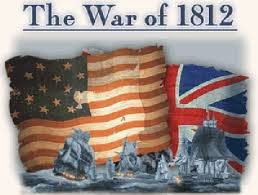 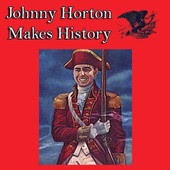 THE PRATTLE OF NEW ORLEANS

(to the tune of "The Battle of New Orleans")

As a hist’ry buff, I thought that I should delve,
Into some stated details ‘bout the War of 1812.
’Cause before the BP oil-spill and the Storm they called Katrin’,
Was a diff’rent kind of battle near the Town of New Orleans.

I’d heard of Laura Secord, and the White House getting torched,
And a bit of British Caribbean forces getting zorched.
I checked it with my Southern spouse, her knowledge too was pale,
But we both knew Jimmy Driftwood’s folksy song could tell the tale.

We knew by heart the Johnny Horton version,
With the poor alligator that got used as cannon-bore:
It topped the charts over here as well as Britain,
Though it clearly smudged the history and magnified the lore.

Was Old Hick’ry drinkin’ buds with Jean Laffitte?
And why’d the British bring along so many drums to beat?
And who’d believe the dyin’ words of General Pakenham
Were “you better quit a-foolin’ with your cousin Uncle Sam”?

Did seasoned soldiers turn and do the rabbit-run,
When confronted with militia who were firing squirrel-guns?
So I took a couple Beanos, then I snarfed on nacho-chips,
And I googled “Town of New Orleans and British fighting ships”.

It seems…
The Brits had occupied the west bank Mississip’,
Fog lifted, they got blasted sneakin’ over in their ships,
More leaders killed and wounded as they tried to storm the Town,
So their troops were not a-runnin’, they just stood and got mowed down.

Weeks thence, per Wikiped’ in Feb’ 1815,
The English, reassembled, sailed out east from New Orleans,
They targeted more mischief ’long the coast of Alabam’
(In the hold the rum-packed body of their Gen’ral Pakenham).

They left Mobile standing when the orders finally reached ’em,
“No territory changing, just return to status quo”,
On Christmas Eve belligerents had penned the Ghent treaty,
So the Indies Fleet sailed home across the Gulf of Mexico.

This strange War that began with maritime embargoes
Seemed a drawn-out pointless offshoot of Napoleonic woes;
If “agreed on as a triumph” on the two sides of the border,
It’s the writing and the citing and the singing makes it so !

Enjoy chord-charts and lyrics at the Corktown Ukulele Jam songbook (Parody section at end): Corktunes: The Prattle of New Orleans


To play the original song- The Battle of New Orleans, Johnny Horton version, check out Corktunes, the songbook of the Corktown Ukulele Jam here 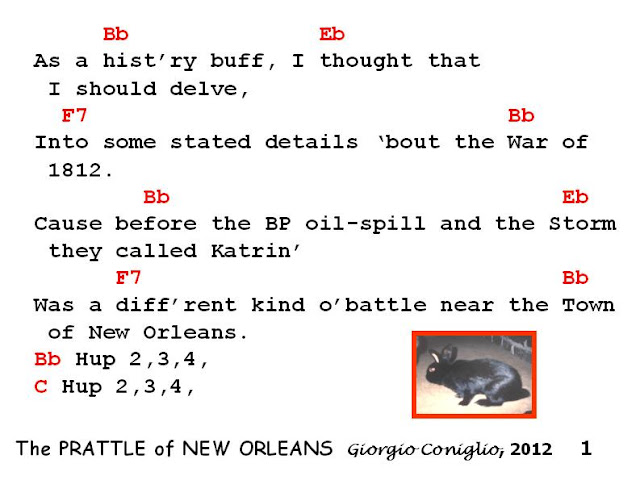 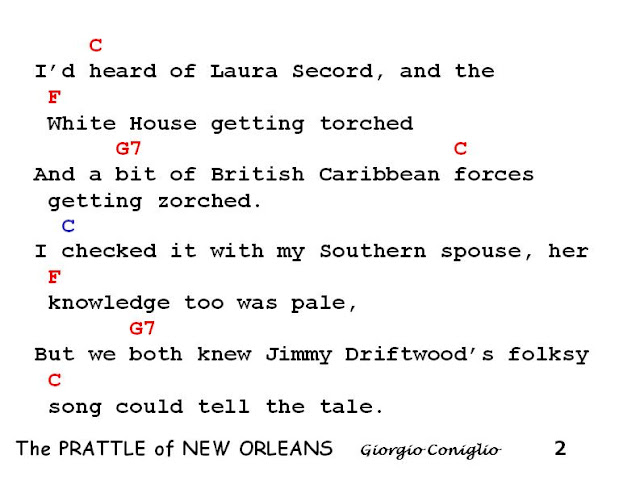 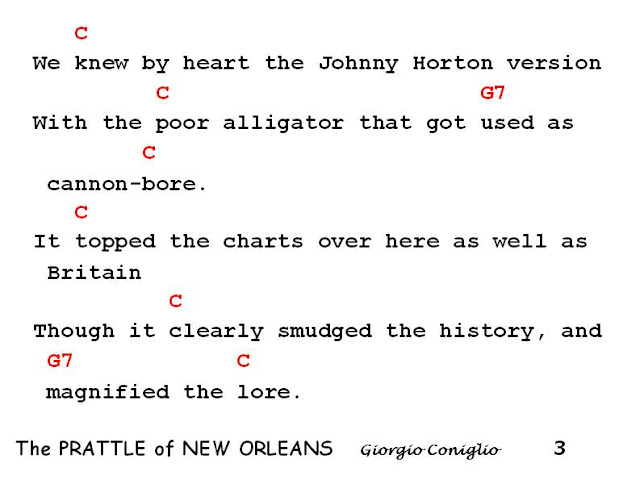 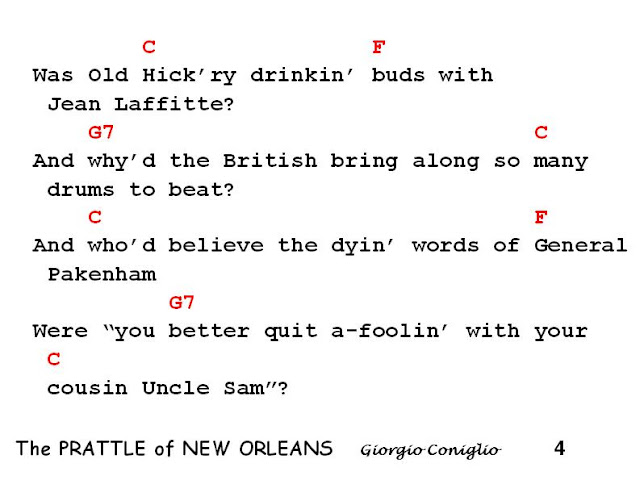 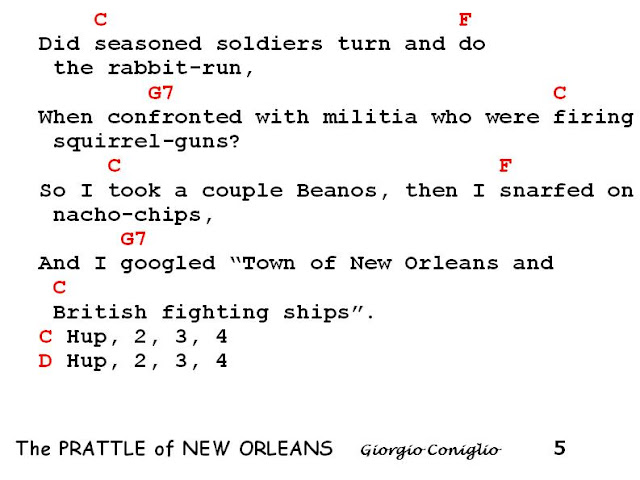 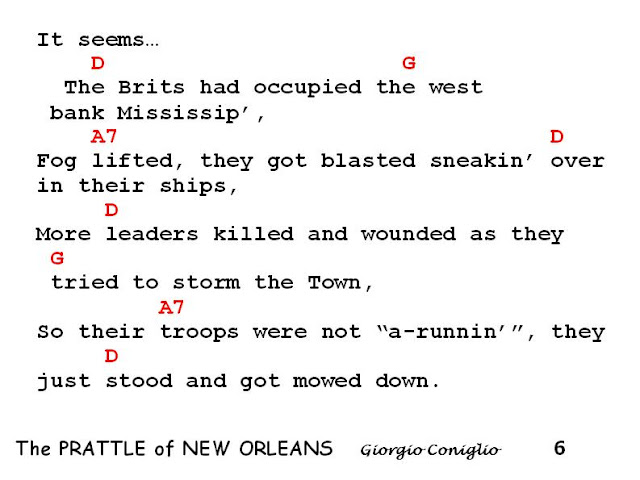 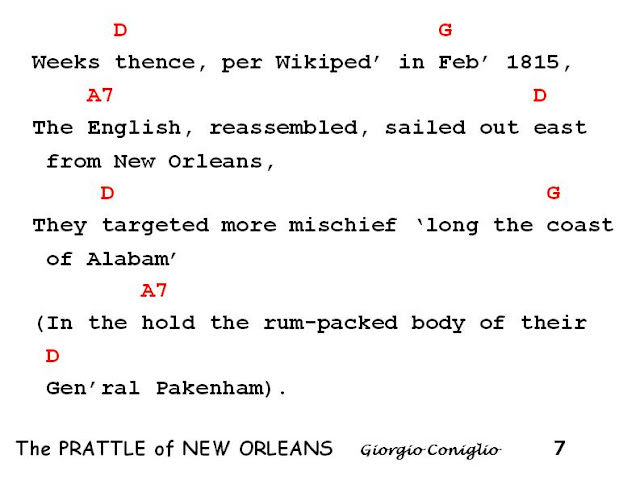 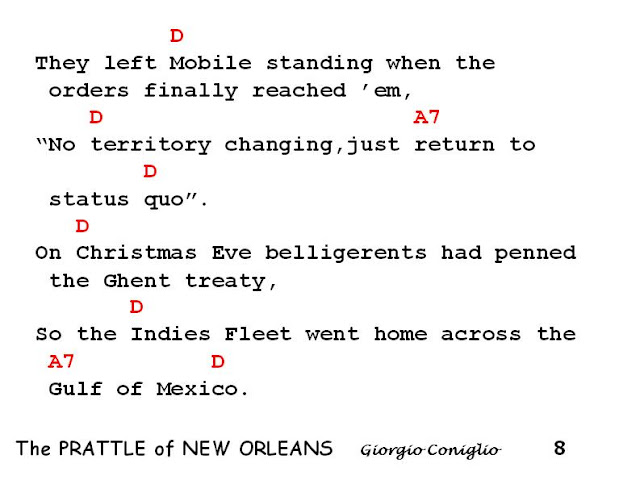 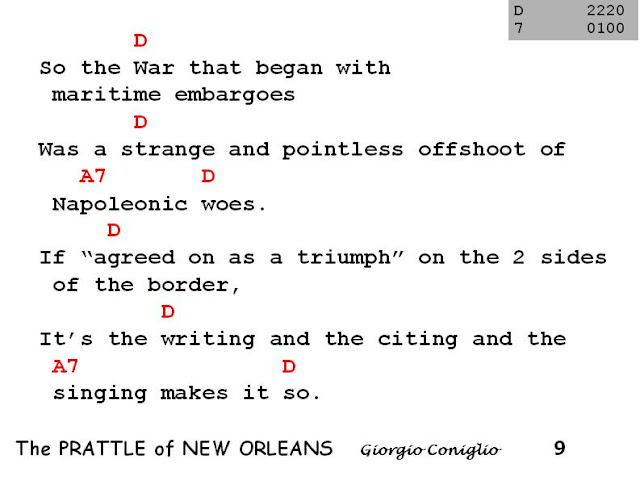 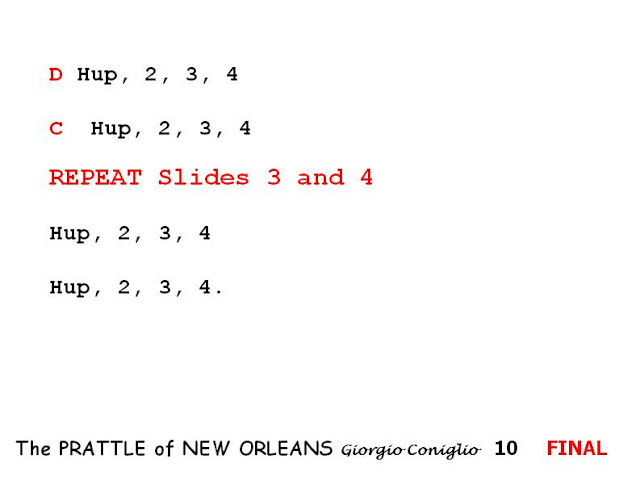 Posted by Giorgio Coniglio at 22:33