ORIGINAL SONG: These verses can be sung
to "The Limerick Song", as in "The Flea and the Fly". See sactoGranny's recording on YouTube here.
LIMERICK VERSE: Most of theses original limerick verses written by Giorgio Coniglio have been web-published  at the OEDILF website (the Omnificent English Dictionary in Limerick Form).
PARODY COMPOSED: Musical collage by Giorgio Coniglio, October 2016. An earlier version was web-published at AmIRight.com as "The Limericks of Gun Control".

See also these other blogposts for other  singable limericks on this topic:
The Sounds of Gunfire , post #134
The Bipolar Illness of Gun-Toting Phyllis, updated to post #184

THE LIMERICKS OF GUN-CONTROL

1. Elmer Fudd, a myopic fanatic,
Dreamed new schemes based on urgings ecstatic:
With his web-purchased gun, he could 'wub out' Bugs Bunny
In bursts of firepower automatic.

2. Crazy 'Syracuse' Jaques had to choose
To inform his co-workers, "J'accuse."
He thought THEY ought to note that they'd gotten his goat:
"My new Uzi can give them this news."

3. On the Terror Watch List you still linger?
For a weapons freak you're a dead ringer?
Here's the gist: while you're keen, buy an AR-15;
Til it's fired, cops cannot lift a finger.

4. Here's the grave plot of secretive Gary,
Who with weapon concealed was quite chary;
But the chain of Pam's locket got caught in his pocket --
The upshot resulting was scary.

5. A honeybee trapped in the bore
Of a gun could foresee what's in store.
Said the bee, "I had betta flee this lethal vendetta;
I'll get zapped if they trigger a war."

6. A churchgoing veteran named Pluggett
Taught novice thugs this hitman's nugget:
If repentance you crave, lay your gun near the grave,
And be sure to pray after you've dug it.

7. A consortium of ursine arms-vendors
Struck gold when they sold ClawExtenders,
Thus fulfilling the prayers (and the right to arm bears)
Of good Second Amendment defenders. 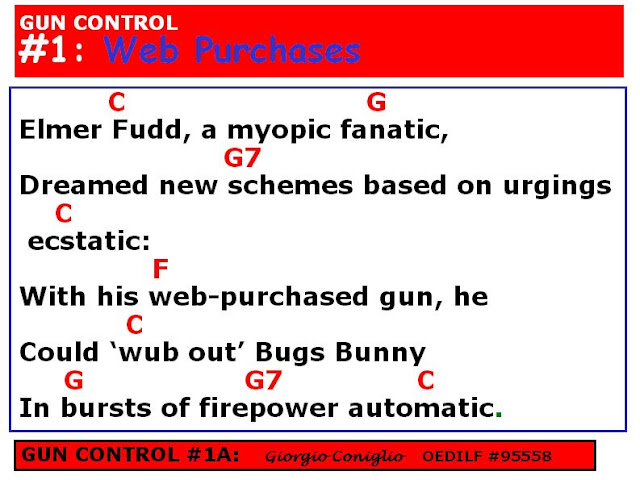 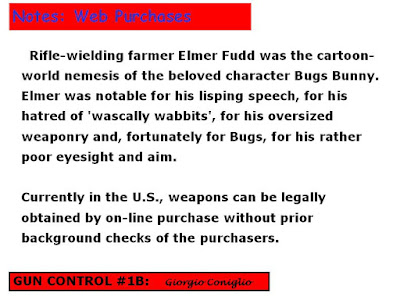 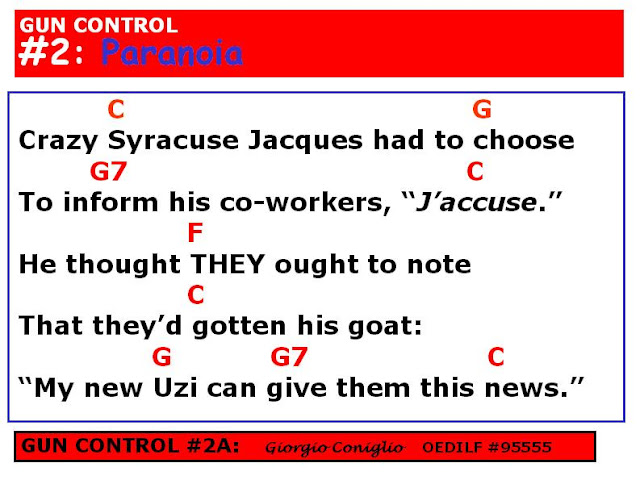 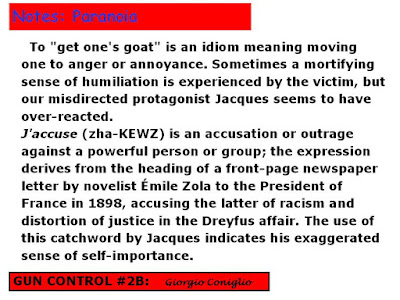 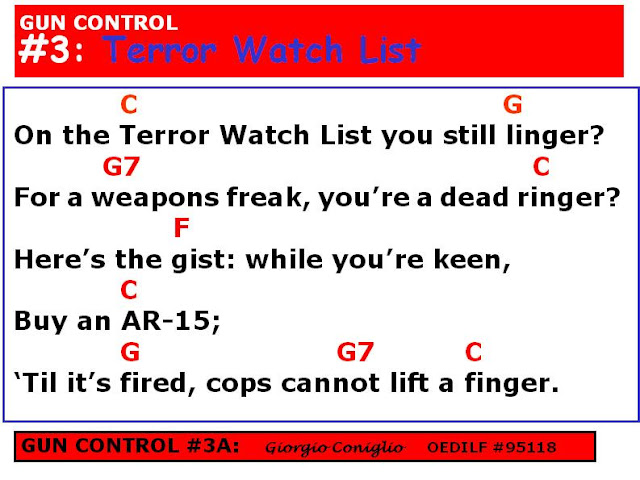 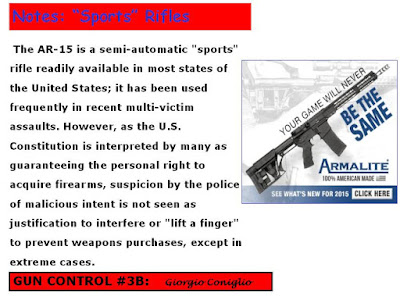 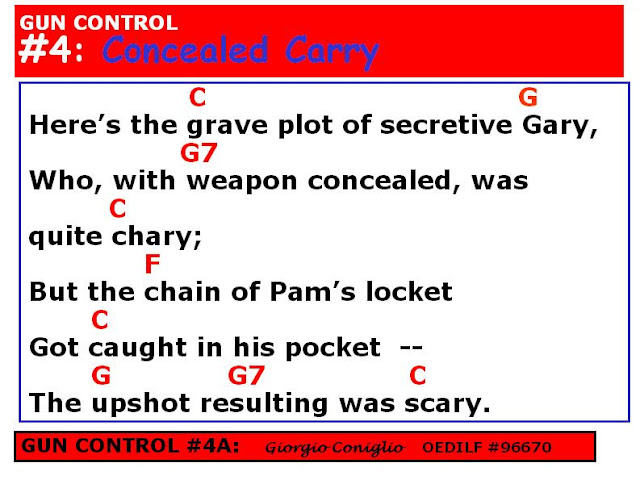 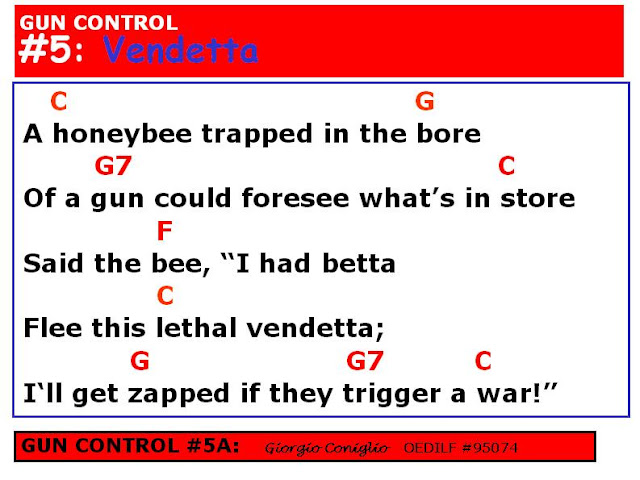 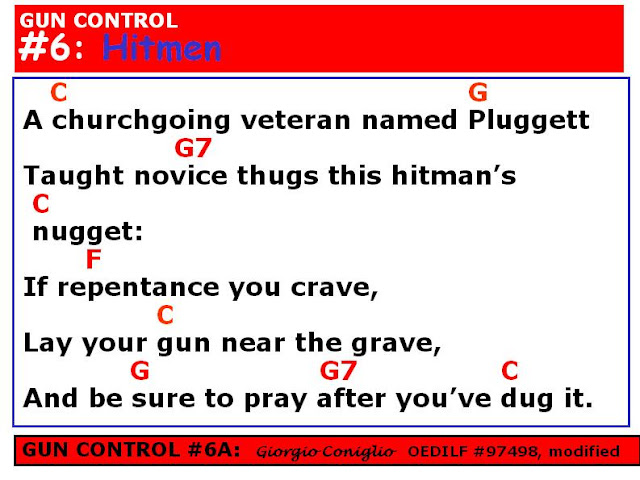 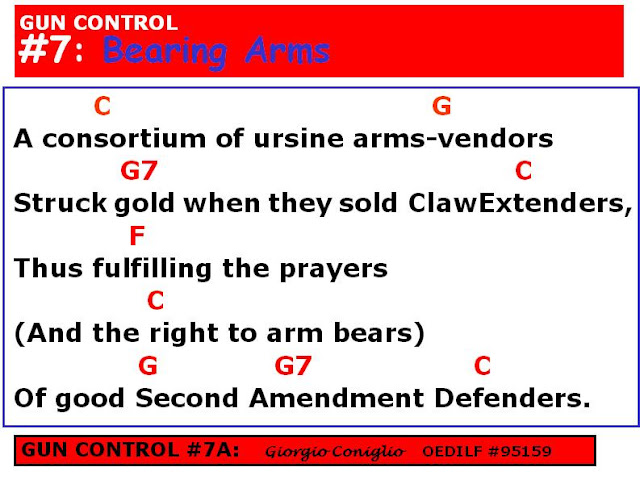 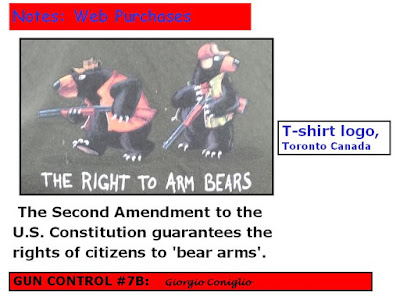 Posted by Giorgio Coniglio at 14:21