Singable Limerick-Medley: "In the Shadow of THE SANKATY HEAD LIGHT"

ORIGINAL SONG: These verses can be sung to "The Limerick Song", as in "The Flea and the Fly". See sactoGranny's recording on YouTube here.
ORIGINAL LIMERICK VERSE: The iconic first verse first appeared in the Princeton Tiger in 1902. Subsequently, further verses have appeared extending the story of the old man's bucket of cash.
PARODY COMPOSED: The limerick verses by Giorgio Coniglio have been web-published as indicated at the OEDILF website (the Omnificent English Dictionary in Limerick Form).
Musical collage by Giorgio Coniglio, October 2016.
CONTENTS:
1. Classic Clean Nantucket Limerick
2. Cape Cod Codger
3. Dale, the Bay Stater
4. Old Flynn
5. Parent of Wild Child
6. Chuck, the Canuck
7. Poet from Nanaimo
8. Older Man from Nanking
9. The Moeurs of Nantucket

The Sankaty Head Light is a symbol of the island of Nantucket, MA. As the classic limerick verses provide inspiration to limericists, OEDILF uses the logo shown here. This major work-in-progress meticulously edits the original contributions of hundreds of authors, and now covers the alphabet from A to Ge, with over 96,000 limericks dedicated to word definition and entertainment. Completion of the dictionary is estimated to require at least 3 more decades. Learn more about this unusual limerick-dictionary at Wikipedia.


IN THE SHADOW OF THE SANKATY HEAD LIGHT


1. There once was a man from Nantucket
Who kept all his cash in a bucket.
But his daughter, named Nan, /  ran away with a man,
And as for the bucket, Nan-tucket.

2. An old codger who lived on Cape Cod
Tended assets in fashion quite odd.
He could spend as he'd wish / (often smelling of fish)
From his cache in his bucket of scrod.

3. Dale, a Bay Stater out by the water,
Hid his lottery-prize from his daughter.
Later cops spotted Gail / rowing off with his pail.
She's in jail with no bail, now they've caught'er.

4. Martha's Vineyard's home isle for Old Flynn,
Who felt guilt that he'd loaned out his PIN.
Card's account drained, wild Nell / at that Vegas hotel,
Used his cash for her dash into Sin.

5. Asked an entrepreneur from 'the Sault',
"I've a wild child, so what can I do?"
He invented the 'Tucket, / an encrypted e-bucket.
Get online and he'll sell one to you.

7. When a poet grew pot quite sublime
For compassionate use in Nanaim-
-o, son Sasha, a nurse, / stole his cash stash and verse.
Note to self: Rhyme 'Nantucket' next time.

8. A rich older man from Nanking
Took  tender young thing on a fling.
He behaved rather nice / and proposed once or twice,
Then she dumped him, and hocked all his bling.

9. Your discourse on the moeurs of Nantucket
Yields tut-tuts and a curse; you can't buck it.
In the mind of a prude / most terse verses are crude --
So concluding, suggest that they chuck it. 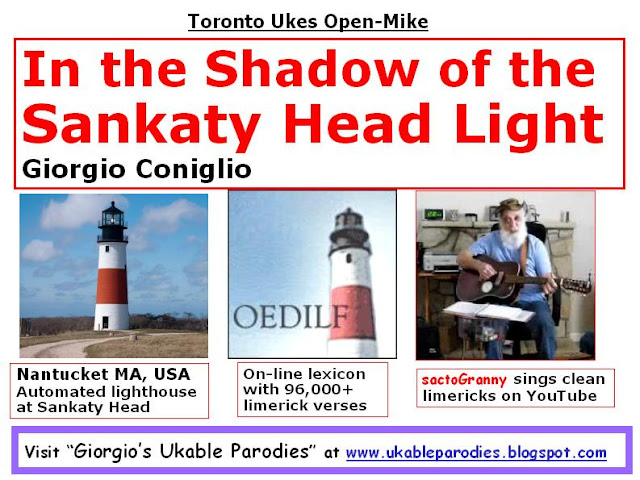 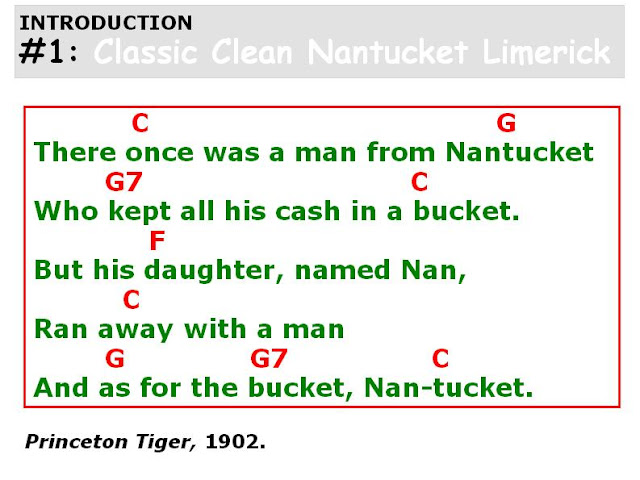 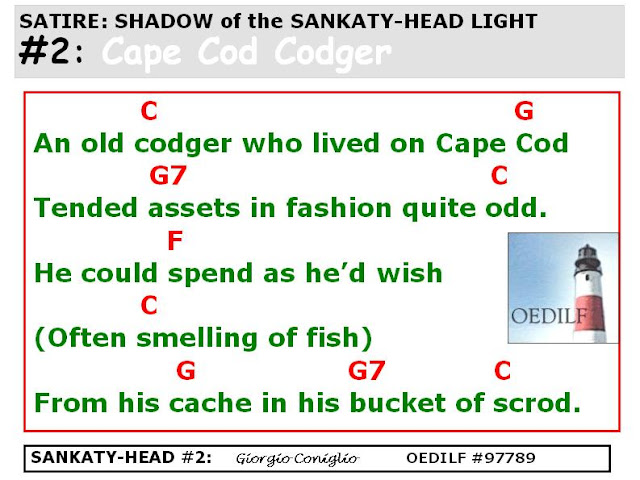 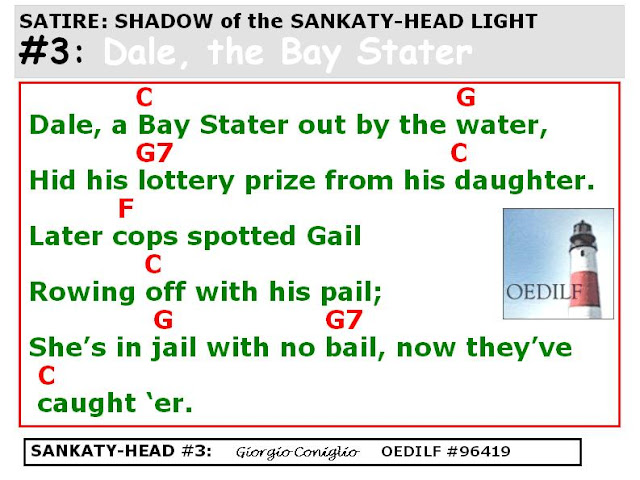 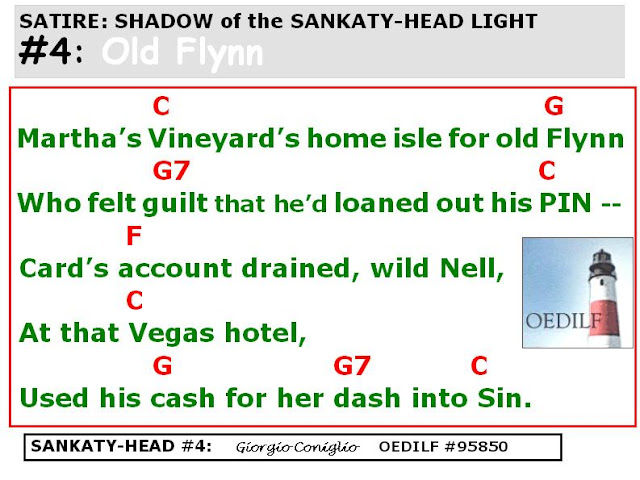 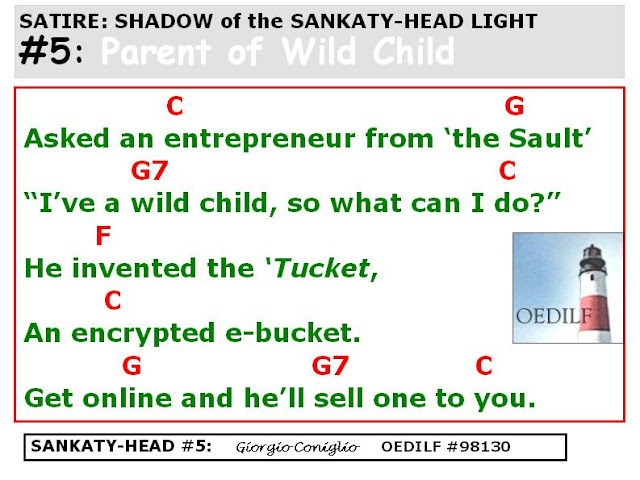 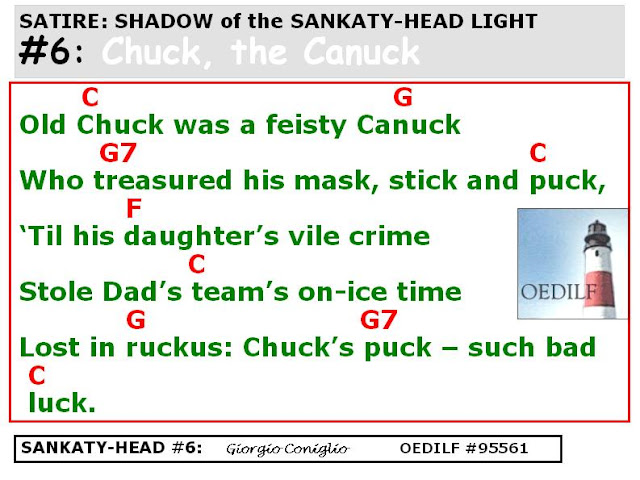 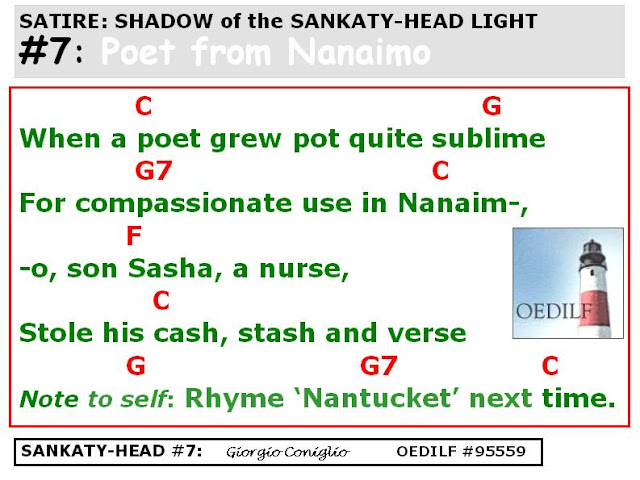 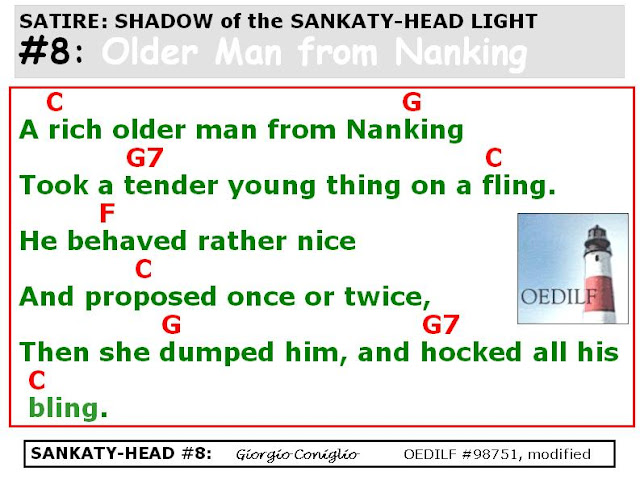 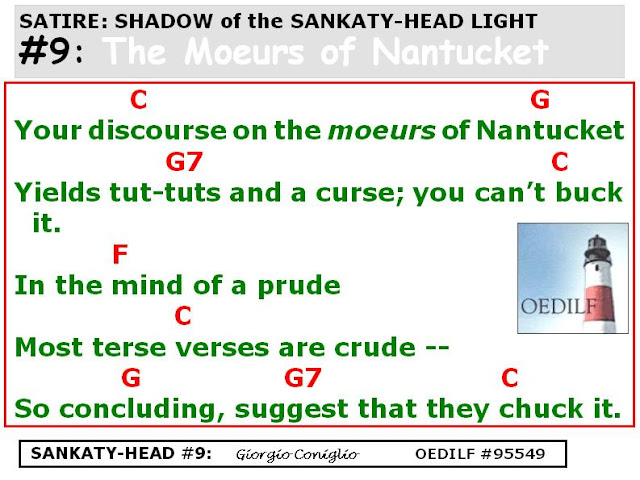 Posted by Giorgio Coniglio at 22:38