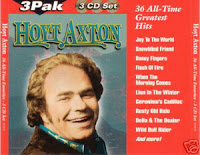 BIOLOGICAL BACKGROUND: The emerald cockroach wasp, or jewel wasp, Ampulex compressa is a fascinating creature, recently investigated with respect to its unusual reproductive behavior. Incredible details of the strange, even nightmarish habits of this predatory insect are shown by this video.

(to the tune of "Boney Fingers")

Know where to hunt to find “la cucaracha”
Filled my stinger with a toxin called GABA *
Direct first sting to prothoracic ganglia
Likely that his limbs are weakened for two minutes.
Likely that ‘ll make his big arms weaker.

Oh! the second sting goes to the base of his brain:
Hit the right target and he's feeling no pain;
Lead him like a leash-dog, then one egg I’ll be layin’
Stuff them in a tunnel, the egg hatches in the mornin'
That is when my larva starts to eat him.

For baby wasps, it’s a huge refrigerator
Inside and out, treats that Mother Nature catered
Five days of eating, then protected place for sleeping
In two weeks adult emerges ripe for breeding
Dressed to kill and carry on life-cycle.

Wasps' lives are scripted, and they don’t need coaches.
Each gal makes toast of several dozen roaches
Mating takes a minute, they won’t need no urgin’
Every mom will be a horror-movie neurosurgeon
Every gal will be a neurosurgeon.

Now, there's.......
Other bio-systems with bizarre behavior
Parasite controls and make the host enslav-ier
There are crazy notions, and this one's no crazier  -
Maybe further research will have human implications
Maybe we'll make mental illness better. 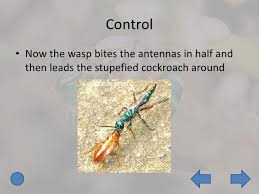 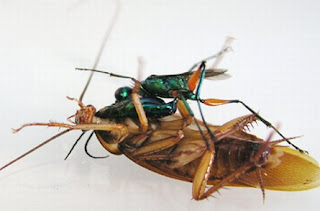