Collaboration between Gordon Lightfoot and W. Shakespeare: "AS WE NUKE IT" 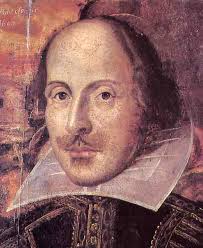 Part 1: POETIC PARODY (reprinted), i.e. poetry set to music
ORIGINAL POEM:  "As We Nuke It" is a parody-poem previously published in medical journals -  Nuclear  Medicine  Communications 2002 and Photon 2004. The poem was reproduced on our sister blog (view with above link) with the author's permission.
The Shakespearean source for the parody is Jaques' Monologue, from Act iii, Shakepeare's "As You Like It", 1623.
ORIGINAL SONG: "The Wreck of the Edmund Fitzgerald", 1976 by Gordon Lightfoot.
PARODY COMPOSED: Giorgio Coniglio, 2013.

AS WE NUKE IT (parody-song)

(to the tune of "The Wreck of the Edmund Fitzgerald") 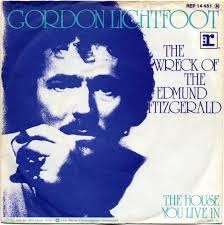 Its ins and outs all Nuclear’s patients.
They have planars, both statics and cine-mode flicks,
And each camera-head gets registrations.

With a digital load, tons more if we've 'tomo' ed
Using a step-and-shoot acquisition;
For Pediatrics, we've got quite a few tricks,
And the PACS list shows studies int'resting.

For that tiny man, at first there's a milkscan —
Through the night his lungs pooling his puking:
Then, refluxing girl for her cysto, toes curled
Absorbed doses quite small, 'though we're nuking.

Though full bladder's her plight, as the moon lights the night
We can measure reflux while she's peeing;
Her neighbor's orchitis, they won't pex a hot testis;
No torsion! the Uro keeps sleeping.

Up next there's a bleeder; should he go to "theatre"?
No scoped site by rectal or by mouth.
He's still maroon-stooling; cells label, no fooling,
Seek hot blip somewhere from antrum south.

And then, a shunt-study —with 'tube blocked distally?',
We assume pressure's high, we've tray ready.
So when we draw back from bulged reservoir Hakim,
And inject, we'll find his belly empty.

The next scan does shift with dynamic-flow drift
Is the post-op kidney on the lam?
Drainage pouch on his side, we'll i.v. frusemide
A diuretic-enhanced renogram.

Good partner in stride, it drips quickly with pride,
No such luck for its mate now diverting.
Big organ's counts doubling, and that's rather troubling -
No peaks or downturns in its curving.

Its in-s and out-s  all Nuclear’s patients.
They have planars, both statics and cine-mode flicks,
And each camera-head gets registrations. 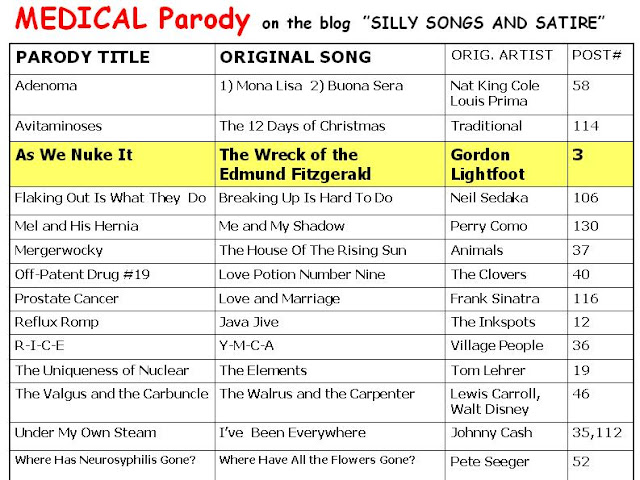 HOTLINKS TO OTHER MEDICAL-THEMED SONG-POSTINGS
Adenoma
Avitaminoses
As We Nuke It (see below)
Flaking Out is What They Do
Mel and His Hernia
Mergerwocky
Off-Patent Drug#19
Prostate Cancer
Reflux Romp
R-I-C-E
The Uniqueness of Nuclear
The Valgus and the Carbuncle
Under My Own Steam part#1
Under My Own Steam part#2
Where Has Neurosyphylis Gone?
...AND A FEW LIMERICK-BASED SONGS
Singable Limerick-Medley #17: Nuclear Cardiology
Singable Limerick-Medley #20: Medical Imaging